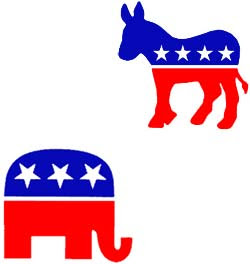 The Washington Post article this morning about Obama inserting himself into the debate over where the KSM trial should be held (finally) quoted a statistic that has been puzzling me. It seemed off the wall to me when I read it this morning but I didn't question it too much at the time because I was more focused on the bigger issue, it seemed to me, which was that Obama is now paying attention to matters of national security.

The Post said this morning that Obama is more trusted on matters of national security than Republicans, which is so very odd to me (emphasis mine):

According to the latest Washington Post-ABC News poll, 55 percent of voters say military tribunals should be used to try suspected terrorists, compared with 39 percent who say the civilian court system should be used. In November, there was an even split on this question. Still, Obama has an advantage on national security, with a majority of Americans continuing to approve of the way he is handling the threat of terrorism -- his highest-rated issue -- and 47 percent saying they mainly trust Obama on the issue compared with 42 percent who trust the GOP.

Yet according to Rasmussen on February 10:

On national security, Republicans are trusted more by a 49% to 40% margin after leading by 17 points in January. This marks the first poll to show Republicans earning less than 50% of voters’ trust on the issue since August of last year.

And in the War on Terror (still Rasmussen):

Recent polling shows that voter confidence in U.S. efforts in the War on Terror is near its lowest level in recent years. Only 36% of voters say the United States is safer today than it was before the terrorist attacks on September 11, 2001, marking the lowest level of confidence since Rasmussen polling first asked the question in 2002.

So where does the Washington Post come up with these numbers?

The closest I can get is this Washington Post - ABC News poll dated Jan. 12-15, 2010 in which Obama does have more favorable numbers.

When asked if respondents approved or disapproved of the way Obama is handling terrorism, the results were:
It's interesting. Curious, but interesting. The number of those who disapprove has climbed from 26 to 42 yet those who approve has stayed pretty much the same - from 57 to 55.

The sampling for the latest poll is supposedly:
When asked how much confidence one has in (item) to make the right decisions for the country's future, 47% trusted Obama to 24% who trusted Republicans in Congress and 32% trusted Democrats in Congress.

And on preventing another terrorist attack in the U.S.:

Obviously that number has changed since Obama took office.

At any rate, I can't find the numbers WaPo refers to in their article today and they don't link to the poll. This January poll is the closest I can find.

I just don't believe more people trust Obama with national security than they trust Republicans, although I guess it could depend to which Republicans one refers. The Democrats, after all, is the party who just charged a man with explosives in his undies on an airplane in Detroit with nearly 300 people as a common criminal rather than an Al Qaeda trained enemy combatant.

I'm not trusting them. No way.
Posted by Pat Austin Becker at 7:36 PM

I remember planes couldn't be flown, because the military budget was slashed to the point where there was no money for parts. In order to keep up the flying hours on a plane, engines had to be swapped. And to get operational times for tanks or other equipment, the same thing had to be done. It wasn't a good time to be in the Army or any other branch.

Carter's castration of the military and his wimpish attitude was like blood in the water for the sharks. Every pissant dictator around the world viewed Carter, and America, as weak. Hell, even Idi Amin of Uganda thumbed his nose at us.

By sticking in the back of the Shah of Iran, didn't provide military help to prevent the Iranian Revolution of 1979, during which America was held hostage for 444 days, because Carter had no balls.

On January 20, 1981, the
very moment Reagan said, "So Help Me God!" the plane which the American hostages were on left Tehran and on its way to Algeria then onto Rhein Main Air Base in Germany. Why? Because Reagan PROMISED to take military action against Iran. He meant it, and Iran knew it.

Muammar Gaddafi wouldn't let well enough alone and found out what American F-111's could do to his palace thanks to Reagan.

The Reagan-Bush One years weren't without sorrow, because the terrorists did inflict damage to the United States from time to time, but they paid for it when they did.

Then came Clinton. Every time America was attacked, Clinton would say, "We're gonna get them," but never did. Each time the attacks were bigger than the ones before.

It is my belief that thanks to the paper tiger responses of Clinton, Al-Qaeda and Osama Bin Laden thought Americans would roll over, thus 9-11 happened. But they were wrong. Bush reacted and reacted with might.

Now we have Obama and his week-kneed approach to security. All I've seen from his so far is either getting in bed with our enemies, or the pissant dictators thumbing their noses at us again.