Gitmo is Looking Better and Better to Obama 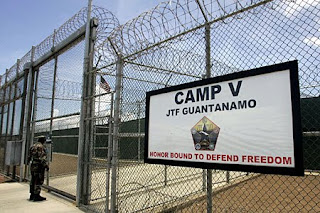 Well I guess Obama IS rethinking his decision to renovate the Thomson, Illinois prison now that he's probably beginning to hear the bi-partisan drumbeat against it. According to Steny Hoyer today:

“I think the administration realizes that this is a difficult issue,” Hoyer said, speaking at his weekly meeting with Capitol Hill reporters. “And I think that they are assessing where they are and where they think we ought to be, and I think that’s appropriate and I look forward to discussing it with them.”
Congress would have to appropriate the funding for the move, of course, and has so far appeared more than unwilling to do so, to their credit.
This realization, on the heels of the KSM trial blunder, on top of the Abdulmutallab flub, points to a serious flaw in the House of Obama foreign policy.

Jennifer Rubin points out an ABC New report in which "Democratic Sens. Jim Webb and Blanche Lincoln are joining Republicans to up-end plans for a civilian trial for KSM by denying funding to transport and try them in the U.S." Joe Lieberman and John McCain are also against such a move.

I don't for one minute believe Obama is rethinking this decision for any other reason than on funding. If he had the funds for it - he'd stick with his plan to import terrorists to Illinois. The 2010 elections are coming up and national security is clearly going to be an issue. For Steny Hoyer to suggest that Obama is having some new awakening is naive.

So, maybe it's back to Gitmo, after all! Go figure. Why didn't I think of that.
Posted by Pat Austin Becker at 4:59 PM