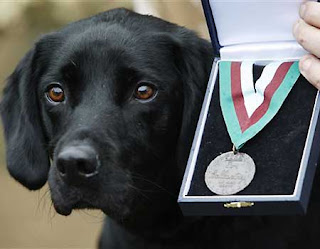 Heartwarming story of the day via Fox News:

The life-saving skills of a black Labrador have earned him a top medal in the British Army, Sky News reported Wednesday.

Nine-year-old Treo's job is to sniff out roadside bombs in Afghanistan for soldiers, and he has proved rather good at it.

In August, 2008, while working as a forward detection dog in Sangin, Treo found a "daisy chain" improvised explosive device (IED) - made of two or more explosives wired together - that had been carefully modified and concealed by the Taliban at the side of a path.

A month later, his actions saved another platoon from guaranteed casualties, again by finding a daisy chain IED.

Now he is being rewarded with the Dickin Medal - the animal equivalent of a Victoria Cross - the highest accolade for a military animal.

Story of the Dickin Medal here.

Email ThisBlogThis!Share to TwitterShare to FacebookShare to Pinterest
Labels: dogs