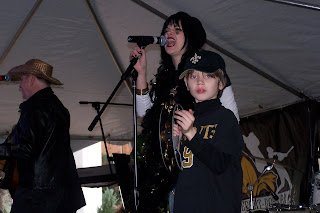 We've got a big weekend on tap around here and it's already underway!

This afternoon at 4:00 was the "Who Dat" Pep Rally on Travis Street downtown. I met my brother down there and we hung out for about three hours listening to Robin and the Bluebirds (video below) and taking part in the festivities. Mayor Cedric Glover and the Shreveport City Council, specifically Joyce Bowman, came up with the idea to have a Pep Rally on Tuesday. Through the week they pulled together a fabulous celebration!

Shaver's Catering was there handing out jambalaya, there was face painting and balloon art for the kids, and lots of music and community participation. Huntington High School's band was there, their entrance even more dramatic than expected as their big drums came bellowing through the alley between the tall downtown office buildings.

The Battlewings Dance Line was there and the Southern University Cheerleaders as well. 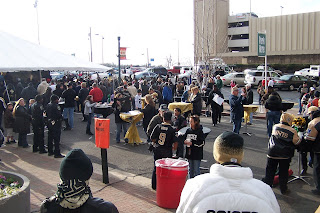 Gras. The mayor and various council members threw beads, hats, cups, and footballs from the stage as Robin belted out "Mardi Gras Mambo", "At Last", "C'est La Vie" and of course, "When The Saints Go Marching In."

When it was all over, about 7:00, my brother and I headed to my house to collect Steve and we went on down to Superior Mexican Restaurant to hear the Great Jimmy Day and friends play a couple of sets. I haven't been to Superior in, no lie, 20 years, and it hasn't changed one iota. It's still a packed house with a 2 hour table wait. We squeezed in a faux table next to the band, and a 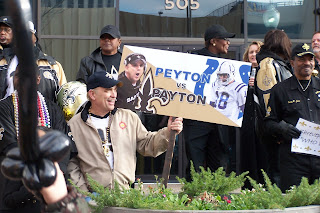 former student recognized us and took pity on us, waiting on us when he didn't have to. Hats off to him!

The Barkus and Meoux Parade in the afteroon and then ....

This is Robin and The Bluebirds, "When the Saints Go Marching In." Not the best quality but I was holding my camera over my head, shooting blind.

Here's the local media video. I'm in it, around 2:30 or so ... I'm the chick in the #12 Colston jersey leaning against a car shooting the Huntington Band. Gotta have quick eyes to catch me.