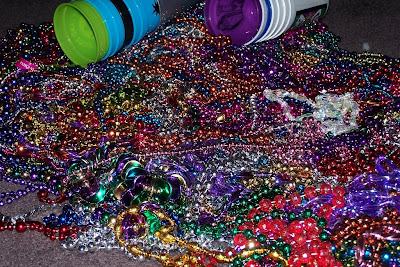 Today the high is going to get to 50 degrees which isn't very warm when the sun begins to set and the Mardi Gras floats begin to roll.

I will be risking life and limb today, standing in the cold, probably near a fire pit, probably drinking beer and eating something that came off a grill.

Before the floats roll, and they'll get to our end of the route around 7 or 7:30, I will have walked miles up and down East Kings Highway and down side streets talking with friends and looking to see who is there. I'll take pictures of anything that catches my eye. I'll probably get run over by a couple of skateboarding kids or hit with a random football or two. I'll ogle the food being cooked on the grills along the route and experience the most delicious food smells and wood smells up and down the streets.

Once the floats roll the objective will be to catch a bunch of cheap, plastic, shiny beads made in China that will soon go into the garage in a big box for eternity. If I'm lucky I'll get a bunch of plastic cups and if I'm VERY lucky I'll catch some Frisbees to bring home to my dogs. I will step on the hands of other adults, I will jostle aggressive teenagers out of my way for position, I will yell and scream at the people of the floats who cannot possibly hear me because of the music blasting from their speakers. And I will come home hoarse and raspy.

When it's all over, Steve and I will gather our debris and my aching legs and his aching back will make our way home, on foot of course, loaded down with supermarket plastic bags filled with heavy beads. At least one of the sacks will tear, risking loss of my plunder, but I'll have a extra bag or two so I can double up.

We will get home, exhausted, dump our loot out in the middle of the living room floor and admire the shiny beads and pull out the ones with pretty medallions or special ones. The cups will find their way into the kitchen and I'll promise the dogs to throw Frisbees tomorrow.

Holy Heck! Why am I dithering here?! I have to go to the grocery store before they close the streets and I have to do at least one load of laundry, go check on my mom, and cook something to take as my food contribution to the Mardi Gras party! I have to get DRESSED - bright green, purple and gold! I have to get my bags ready and the beer chilled and..and...and....

Carol's sheep are celebrating the Super Bowl and she has a long list of great links when my necessarily short list today runs dry.

Stacy McCain is on another road trip, this time in Alabama, and has a great story to tell!

Heh! Fishersville Mike explains all the snow in D.C.

Bride of Rove makes a very valid point about the reasoning behind naming her blog "Bride of Rove."

Another Black Conservative has the story of the woman who was buried in a Barack Obama t-shirt who Obama decided to politicize and then couldn't remember her name. Clod.

Caught Him With a Corndog explains her little place in the echo chamber.

In possibly the most bizarre story I've read this week, Jim Treacher was run over by a car. Not just any car. Camp of the Saints has the story.

My friend Greta at Kiss My Gumbo has the Super Bowl drinking game; here's a sample:

On a more serious note, be sure you're reading The Dialysis Diary. She breaks my heart every single day but I can't quit reading it. Today she finally explains "D" a little of which I had already figured out.

The Daley Gator posts on the "offensive" NBC menu and uses one of Red's Banned Words. Uh-oh.

Carolyn Tackett noted my noting that Jindal may be supporting Crist, but I've not found any more fuel for that fire. I'm just not sure that's going to happen. Not even Jindal can be that dumb. Can he?

SWAC Girl is posting THE most beautiful snow pictures! And Pundette has a great snow post!

Legal Insurrection is on a new mission!

Okay I know there's more but I have beads to catch and things to do. I'll check back on you cat-daddies later and will post some live pictures from the parade route this afternoon.

Stay warm, my friends up north!

Throw me something Pat! That Kiss My Gumbo's going to have us all feeling great in no time flat ;-D

1) Thanks for the linky love, Pat.

3) I think you can guess who my site is rooting for.