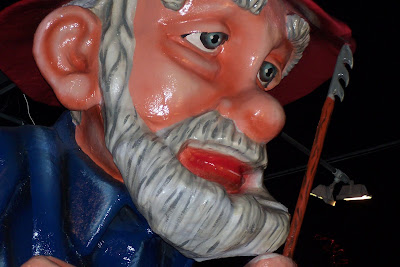 We did the Krewe of Gemini parade last night and had a big time! Steve's son Josh and his friend Heather joined us for this one.

We froze to death; it was quite cold but the sun came out during the day and that helped some. We always walk to the parade from my house; we usually wait until they close the roads and then head out. You see all kinds of people in all stages of celebration along the way. We saw one guy run right over one of the wooden barricades (I don't think the police let him stick around to see the parade). Kids were skateboarding in the streets and

people had their dogs and their grills out. Most people had fire pits roaring and music blasting.

At Harriett's we dumped off our stuff and then walked on a little more just to check things out. We made friends with Bruiser and saw the Krewe of Drew where the entire group was wearing No. 9 Brees jerseys!

riett's we grilled, ate, talked, took pictures and waited for the parade. I stayed by the fire most of the afternoon!

The parade itself was great fun and we loaded up on more colorful beads, cups and stuffed animals. I gave all my cups to Heather; I have more around here than I can ever use. How many plastic cups do you need, anyway?! We scored one Frisbee for the dog and several stuffed animals. Oh, and one bag of candy. Heather got some crazy sunglasses.

Today we're headed out to the Highland Parade, which thankfully is the last one we do. We LOVE LOVE the Highland Parade; it's a daytime parade and a neighborhood deal. It's a huge parade and lasts a long time but they throw lots of stuff and if you're lucky you'll catch a Moon Pie or a hot dog from the Krewe of Bar B Que!

They've predicted a 30% chance of rain on our parade today, but so far not a sign of it. Fingers crossed.
Posted by Pat Austin Becker at 8:08 AM

Have to admit I watched the Gemini on TV! Haven't been in a couple of years, and then was to Highland parade. Like you, I love the Krewe of Highland, such a great parade and crowd.

Sorry I am going to miss the Highland. I watched the Gemini on TV. It's so much shorter on TV !!!!

I'm sorry you are going to miss it, Sandy! I took a picture of the back of your float last night; they threw me NOTHING! :(
Was a pretty float, though! :)

HOw fun is all that? Mr. COrndog wants that bulldog. He'd name him "Ugga".

I went out and did have a good time but it wasn't Gemini's fault. The parade was one of the worst. The floats were a quarter to a half mile apart and there was little music. No bands. The people did not throw near enough junk and that has been true since Gemini started rolling years ago.