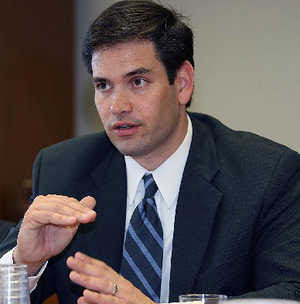 Many of my blogging buddies are headed to CPAC and I look forward to their reports; I know Stacy McCain will be there with Da Tech Guy...what could go wrong? Keep an eye on their blogs for updates.

Politico has a report on Rubio today and his appearance at CPAC noting that this will be a sort of national introduction of Rubio to many conservatives outside of Florida. Rubio has come from behind to lead Crist in the polls now in their Florida Senate race and I don't think Rubio is satisfied with his lead. I think before the election arrives Rubio will leave Crist far behind, especially if the only bang in Crist's bag is this tactic:

Crist’s campaign, which has derided Rubio as a shallow former pol who ducks discussions about the less flattering aspects of his record, isn’t shying away from attacking Rubio during his moment in the national conservative spotlight.

On Wednesday, the Crist campaign released a mock draft of Rubio’s speech.

“Since my campaign began, I’ve had the privilege of becoming the latest cover boy,” reads the fake speech. “I’m thrilled many of you don’t know me or what I’ve done during my 8 years in Tallahassee. My record is irrelevant in this campaign. My previous statements and actions serve no purpose in this campaign.”

I think if all Crist's campaign staff has to do is write mock drafts of a speech for Rubio then they will find themselves even further in the dust as the weeks go by.

If you listen to Marco Rubio you can see he's the real deal. I'm excited about his future in the Republican party.

The Washington Times also has a report on Rubio today:

Marco Rubio, a rising star in conservative Republican circles, said he sees the exploding "tea party" movement as a political energy source to be tapped, not a political party to be led. Mr. Rubio's underdog race for the Senate against Gov. Charlie Crist in Florida's Republican primary has become a rallying point for conservatives nationwide.

He has been called the potential first "tea party senator," but he's quick to note that the anti-big-government movement is a symbol of mounting voter frustration with the records of both major parties in Washington.

I really wish I could be at CPAC to hear his speech! Is it streaming anywhere today? If you know, leave me a comment.

Posted by Pat Austin Becker at 6:06 AM

Only the formidable get attacked. Go Rubio!
ON another note, I'm pretty sure the graphic posted by your donation button helps. I've had my button up for a year and nada. Maybe if I slap a bottle of honey mustard on there it'll grab attention.

I wish I were at CPAC this year, too. *Sigh* My goal is to go next year!

I'd love to go but since my students can't tell the difference between nonfiction text and a biography I need to stay here in Vegas.