On Books, Trash and the Dalai Lama 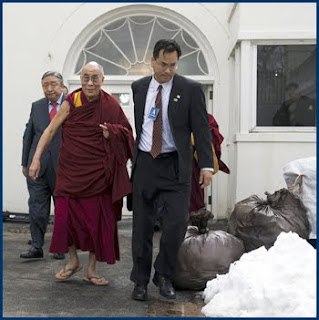 What is wrong with THIS picture? I mean, seriously? It just seems to me there is bound to be some logical explanation for this, but for the life of me I can't figure out what it might be. Why in the world would one send the Dalai Lama out the back door with the trash bags unless you just have no class whatsoever. Oh, wait...

Earlier this week when the brouhaha broke out about books on Socialism in the library at The White House I was puzzled over why that was a big deal; apparently the rumor was that *gasp* Michelle Obama had selected all the books and she favors works on socialism. Well, I read a lot of stuff that I don't necessarily advocate or practice, so this didn't seem a logical conclusion to me. As it turns out, those books have been in the library of The White House since 1963:

The library came into being during the presidency of Franklin Roosevelt. In 1961, First Lady Jacqueline Kennedy asked Yale University librarian James T. Babb to oversee a committee that would select books for the library. In 1963, 1,780 were placed on the shelves.

"The White House library is a reference and recreational library for the use of the President, his family, and official staff," wrote Babb in the forward to "The White House Library: A Short Title List," a document from the White House Historical Association.

"It is intended to contain books which best represent the history and culture of the United States, works most essential for an understanding of our national experience. The collection has to be strictly limited because the attractive library on the ground floor of the White House has shelf space for only twenty-five hundred volumes. Authors, with few exceptions, are citizens of the United States; fiction and poetry by deceased writers only have been included."

"The American Socialist Movement, 1897-1912" by Ira Kinnis and "The Socialist Party of America" by David Shannon are included on that original list of books, along with books about the two national parties, communism and still others about socialism.

My point is, there was a logical explanation.

So what's the logical explanation for sending the Dalai Lama out with the trash? I can't wait to hear this one. I'm sure the spin is coming!

1) Pat: I used you as the link to correct the story regarding Michelle Obama and The White House Library.

2) Linked to at:
Take Out The Papers And The Trash