Oh, To Be a Fly on the Wall 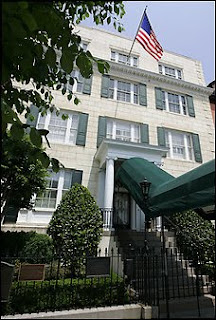 I so wish I could watch the health care summit at Blair House tomorrow, but alas, work beckons. I suppose I could TIVO it (yes, I'm that big of a nerd) but it would be anticlimactic somehow. It is sure to be great theater, however, and what I really wish is that I could just be a fly on the wall (hiding, not one snapped out of flight and squished) in that room.

Senator John Barasso will also be there as the top Democrat and top Republican leaders were told they could invite four people each, and he was invited by Senator Mike Enzi.

The meeting is tomorrow but the scrapping has already begun. Robert Costa at The Corner reports:

Barrasso says that President Obama and Democrats are “arrogant” for proposing a “more expensive” health-care proposal just days before the summit. Barrasso adds that he remains “fascinated” at how not one “logical thought” has been expressed by Democrats in their summit-prep efforts, and still feels that Obama is unwilling to work with the GOP. “I don’t think [Obama] has been open to Republican ideas,” he says.

John McCain plans on attending the meeting and he isn't bringing a positive outlook, either, but instead has a petition going against the Democrats plans:

Tomorrow, President Obama will host a health care reform summit to discuss his proposed overhaul of our health care system. I believe to achieve real reform; we must scrap it and start over. If you agree, I ask that you sign our "Scrap Health Care Reform and Start Over" petition. We'd like to gather 100,000 signatures overnight to send a message to the left, and your immediate action will help us reach this goal.

Oh and meanwhile, McCain encourages you in the same letter to make a donation to his re-election campaign.

U.S. Representative Charles Boustany will be there; he's a heart surgeon and brings a unique perspective to the negotiations but he is under no illusions:

"I'm going to go in hopeful that we can get something done but under no illusion and recognize that they are stacking the deck trying to move forward with the current proposals which the American people already largely oppose," said Boustany.

But Sen. Mary Landrieu, D-La., one of those Democrats who has expressed reservations about using reconciliation for this purpose, indicated this week that she is not foreclosing going along with that option. "I'm staying open to see how these negotiations go forward," she told Politico. "I've not generally been a big supporter (of using reconciliatoin), but the Republican Party, the leadership, has really been very, very, very disingenuous in this process."

"Disingenuous"? Really, Mary? That really means something coming from you! Ouch!

All in all I'd say this could get really interesting! The pre-summit posturing is titillating enough, but tomorrow, all those big egos in one room? Oh to be a fly on the wall...
Posted by Pat Austin Becker at 2:23 PM

I too would love to be able to watch this but like you will have to be at my desk. I have to say though that sometimes watching this stuff can be hazardous to your health - my blood pressure goes up every time I watch the Dems on C-SPAN trying to pull one of their quicky week-end/late night votes. It will be interesting to see if there are any clips for viewing after the fiasco is over. Oh - and Mary Landrieu? What a piece of work!