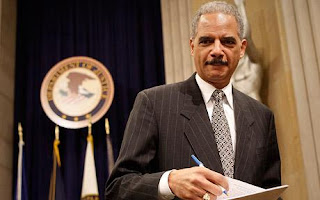 It seems I'm not the only one who thinks Eric Holder may be fixing to go down. I posted on January 31 that Holder might be fixing to be jettisoned, and now Ed Morrissey is thinking the same thing, as are many others:

It’s never a good sign when White House sources begin laying all of the blame for a bad decision on the shoulders of a Cabinet member. In this case, Holder now has two politically nutty decisions to re-think, and don’t be too surprised if the White House starts blaming more of the Abdulmutallab decision through anonymous leaks. Cabinet members exist to give Presidents a way to escape bad performance, through the time-honored method of pushing them out the door.

Morrissey links to Yid With Lid who, like me, isn't buying the theory that Holder made all these lousy decisions on his own:

So he didn't even tell the President? Axelrod and Gibbs had no Idea? Or was it that they thought the country would follow him like lemmings.

I've never, ever for one moment believed Holder made the decision to try KSM in New York on his own. I do not believe Obama would allow Holder the power to throw him in front of the train like that. As I said two weeks ago:

I, for one, don't believe any of Holder's decisions regarding KSM or the CIA issues were made unilaterally; I believe something so critical simply had to be made with Obama's input, or Rahm's, at the very least.

This back peddling on the KSM trial has got to make Obama testy, and even worse, if it ends up in Gitmo as a military tribunal, as it should have been in the first place, he's going to be in a tight spot.

My prediction? Obama will throw Holder under the bus, ramp up the Gitmo-tribunal option, and say it was all done in the interest of national security. He'll speak well of Holder, maybe even move him to some other diplomatic position, and act like he's only looking out for you.

I can smell the diesel fuel now.

Predictions, anyone, for who fills his spot?
Posted by Pat Austin Becker at 9:36 AM