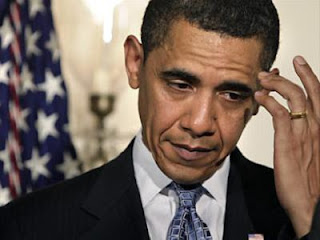 It's true that most of Obama's promises have expiration dates, which Jim Geraghty points out, and as Ed Morrissey says, "this one's a doozy." (That's also the last line in Vonnegut's "Harrison Bergeron" which seems ironically appropriate.)

That went under pretty quick as soon as Obama raised taxes on cigarettes to fund the CHIP program.

But now he seems ready to abandon all pretense of keeping this promise, saying in an interview with Business Week that he is "agnostic" about pulling higher taxes from those making less than $250,000:

Obama, in a Feb. 9 Oval Office interview, said that a presidential commission on the budget needs to consider all options for reducing the deficit, including tax increases and cuts in spending on entitlement programs such as Social Security and Medicare.

“The whole point of it is to make sure that all ideas are on the table,” the president said in the interview with Bloomberg BusinessWeek, which will appear on newsstands Friday. “So what I want to do is to be completely agnostic, in terms of solutions.”

While the broken promise is one thing, I find his use of the word "agnostic" in this context sort of strange. It's kind of reminiscent of when he said the Senate was on the "precipice" of passing health care reform. It's just a weird word choice.

The word "agnostic" comes from the Greek ágnōst(os) or ágnōtos which means "not known." So is Obama saying he doesn't know if he'll choose to raise taxes?

As an adjective, "agnostic" is defined as "asserting the uncertainty of all claims to knowledge." Well.....okay. He has no knowledge if he'll raise taxes? When will he know? What will help formulate his decision? Is he just using this word to try to sound smart? Couldn't he just say, "I'm open minded to raising taxes..."? Or is that not what he meant, because maybe he does know.

Really? His best answer is "I don't know"?

We are so screwed.

(More at Memeorandum)
Posted by Pat Austin Becker at 7:08 PM

"So what I want to do is to be completely agnostic, in terms of a solution"? WTF?

So Obama wants to be totally in a mind set that doesn't allow him to believe that you can prove to him that a solution can exist?

If Obama wasn't president, I would find him so amusing. He's like a pretentious junior high kid trying to prove that he's soooo smart. And seriously, he believes he has so much to prove to others.

Obama can't say "open-minded" because that would make headlines. Instead, he's pulling out his, at this point invalidated, "super-genius" card and starts redefining words as he sees fit. Cute.

Maybe he thinks he is saying he can't commit to an abstract. I wish we had a better president...***sulk***