A Trip Around Town in the Snow

Shreveport in the snow: 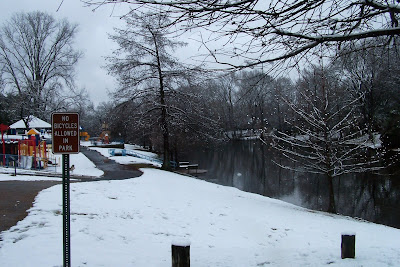 The bayou along East Kings Highway was deserted this morning; usually the park is filled with kids but I guess they all stayed home this morning! 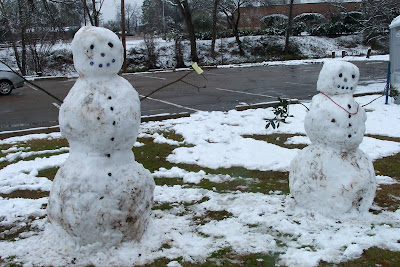 However, some intrepid souls had been out and built a couple of snow people. These are at the bayou which is also along the parade route, thus the beads. The snowman is holding a note with the names of their creators and the note proclaims them to be "Who Dat Snowmen." Their smiles are made from beer bottle caps. 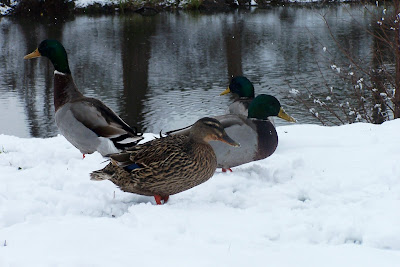 The ducks aren't too happy with the snow, I don't think. None of them were in the water. 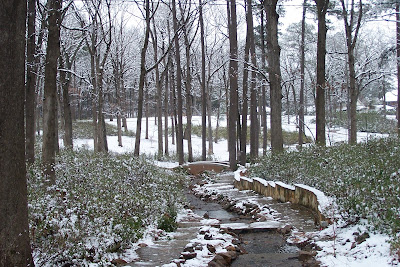 At Norton Art Gallery the scene was peaceful and majestic. There were a few neighborhood kids out playing in the open, snowy areas and a few small snowmen here and there, but mostly it was hushed and beautiful with only the sound of the streams and the snow crashing from the trees overhead. 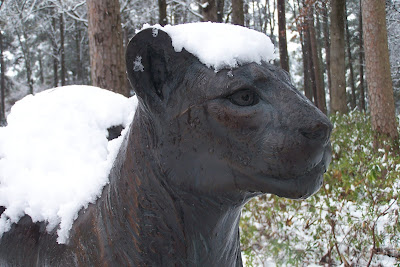 This cat wasn't bothered by the cold as he stood keeping watch over the grounds at Norton. 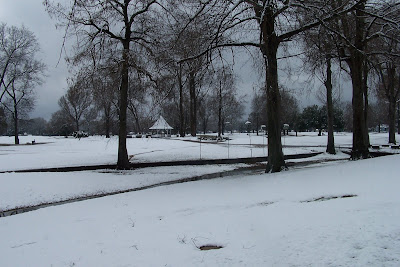 Needless to say, Querbes golf course was deserted this morning, too. I'm sure some die hards would have been out there if the course had been open, though. 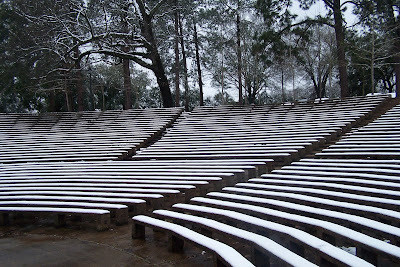 At Centenary College, the band shell was adorned in snow. The campus was pretty quiet. I walked around a little and saw a few students moving from one building to another; there were three girls playing by the band shell, one making snow angels on a hill. Other than that it was all very quiet.

Things are starting to melt now. There will be some snow still around through the day, especially in the shady areas. It's time for this to clear on out though because we have a parade tomorrow!

More photos here.
Posted by Pat Austin Becker at 11:24 AM

Very nice pictures Pat. I am awful with the camera otherwise I might have posted a few pics of our 3 1/2 feet of the white stuff. I love those snowmen. Megan McArdle posted this link of some really funny Calvin and Hobbes snow man themed cartoons. None of them had beads or won the Super Bowl though.

Very pretty! I was out and about when our snow first came down and I wish I could have gotten some pics of the old civil war cemetary downtown. Really pretty. But of course my phone was dying.