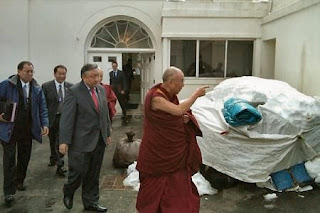 When I posted on Obama's meeting with the Dalai Lama last week I was hoping that a reasonable explanation (or spin) would come as to why the only photograph of the meeting was of the Dalai Lama exiting the White House via a service entrance past piles of garbage.

My optimism was misplaced. There is, apparently, no explanation to come. It is, as they say, what it is.

Kelly Currie at The Weekly Standard summarizes the whole affair and things are just as they seemed in the photo. Well, except they might actually be worse. There was an official photograph taken of the meeting, but it was released on the White House Flickr page, sandwiched in between a photo of Obama walking through the press office and a photo of Obama looking bored in a meeting. The meeting took place in The Map Room rather than the Oval Office, and there was no joint public appearance.

As Currie says, "...the White House managed to turn what should have been a moment of celebration for the Dalai Lama's supporters in the United States and worldwide into a stunning display of disrespect."

I don't suppose we should be surprised; after all, it's the way Obama has treated most of the foreign dignitaries and allies. I'd rather he not have met with the Dalai Lama at all than to have so embarrassed us once again.
Posted by Pat Austin Becker at 9:11 AM

There have been other photographs, one that I saw featured in a Daily Telegraph story from February 19th. It shows Obama meeting with the Dalai Lama in the residence. No President has ever met with the Lama in the Oval Office.