No More Human Props for Obamacare 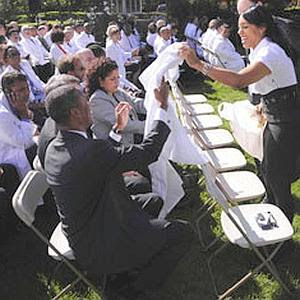 I'm holding my breath waiting to see if the Republicans fall into the trap of becoming Obama's next "human stage props" as Michelle Malkin called the proposed bi-partisan health care summit.

After inviting doctors to the White House lawn and providing them lab coats for a photo op, what will he provide the Republicans for props? Legal pads? Pencils? Scalpels?

Hopefully Republicans will see this for what it is. This stunt smacks of Rahm Emanuel because if the Republicans attend, they'll lose, and if they don't, they'll lose. If they reject the meeting then all Obama has to do is say, "Hey! We tried! They refused our offer for bi-partisan talks! Party of NO!" Then he'll feel free to go ahead with reconciliation.

If they do attend, the television cameras will show Republicans rejecting one lame, job killing, deficit raising Democratic idea after another - "See! Party of NO! Reconciliation coming up!"

Republicans have already sent a letter in response with multiple pointed questions. I'd have bypassed that step. Those questions all seem rhetorical, to me.

Instead, they should make clear that they have put plans forth, provide those plans once again, and refuse to take part in discussions where the bills have already been written and the back room deals already set. The problem here is not Republicans - they can pass the bill without Republicans. It's Democrats who don't like it.

Besides, I thought we were focusing on JOBS JOBS JOBS now...

(More at Memeorandum)
Posted by Pat Austin Becker at 6:04 AM

The GOP needs to move as if they are in control and working in tandem with the populace. I agree with you -- the letter was superfluous. I would like to see the Rs bow up a bit but subtley so that the party proceeds as if they have already mapped out a way to work out the issues without the 'help' of Ds.

Jobs? Pssh. You know very well that nationalizing the health care industry will provide many jobs!

And public sector employees making more than cops, firemen and soldiers put together.