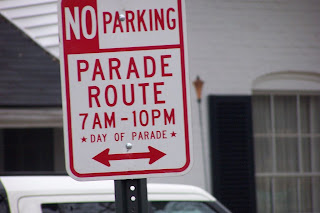 It's Parade Day again and like last week, it's cloudy and cold. I prefer my Mardi Gras parades under sunnier skies and milder temperatures, but nobody asked me. I'll tough it out! Tomorrow afternoon is the last big parade and there is a 30% chance of rain. But I'll be there! The snow is all gone now so we don't have that to contend with, at least.

So since I have beads to catch, let's get on with this:

Stacy McCain has the low down on the low down Keith Olbermann. Olbermann and Andrew Sullivan are about tied for the lowest low down pond scum award in my book.

Bungalow Bill has a post on Obama's college years and some thoughts from a professor who knew him then. Gateway Pundit also has a post on the same subject.

Fishersville Mike is getting nostalgic about the Olympics.

Legal Insurrection pats himself on the back after Patches opts out of running for re-election. Job well done! And Bob Belvedere celebrates!

Ruby Slippers has an Instalanche with her Snow Studs post! Woot Woot!

Carol takes a look at some stimulus dollars and points out that Louisiana isn't the only state that has reason to be embarrassed by Washington.

Little Miss Attila has a great, and helpful, post on Blogging 101.

Donald Douglas has a film he wants you to see.

No Sheeples Here has the best roundup evah! and I really hope there won't be any lamb chops on the table for Valentines Day. Avoid the mutton stew, as well, after playing in all that snow!

Wyblog ponders Kindles and e-books. Put me in the camp of real books any day. I will NEVER be an e-book person. I like to hold the book in my hand, feel the pages, smell the ink and have it on the shelf later.

Red has a snow picture with a red dog.

Bread Upon the Waters posts on a tribute to Flight 3407.

Pundette has a nice round-up of stories you might have missed over the past couple of days.

Bride of Rove is just giddy over Glenn Beck's smack down of Meghan McCain!

I needed a tissue and a hug after reading The Dialysis Diary. Don't miss this blog.

My Bossier got into the snow posting yesterday!

That's going to have to be it for right now. I need to make a quick store run to pick up some goodies to take to the parade this afternoon before they close the streets. Of course, if they closed the streets before I got to the store I could always go to ANOTHER store, but I'm a creature of habit.

Enjoy your Saturday!
Posted by Pat Austin Becker at 8:21 AM

Thanks for the link! I'm with you, real books just feel right in my hands.

Thanks for the link!