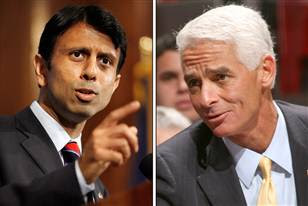 Could Bobby Jindal really be supporting Charlie Crist? Is this true? Or satire?

Reports are that Jindal will be in Florida for the Super Bowl and that he'll also attend a fundraiser, but Jindal's spokesman has been mum on details of that fundraiser. I was under the impression that it was for his own re-election campaign.

Paul Heard, hosting for Moon Griffon yesterday, suggests it may not be so.

I just can't believe Jindal would endorse a tanking candidate like Crist.

We'll watch this one today and see what the real deal is.
Posted by Pat Austin Becker at 10:31 AM

Who knows.
Is Bobby Jindal the reincarnation of Mr. Bojangles? I'm asking because Bobby Bojindal did a good job of tap dancing around the question Sean Hannity was aking him about Katrina Mary's $300,000,000.00 for Louisiana caper.

After his SOTU response last year, nothing about Jindal surprises me anymore.

JIndal is being Loyal. It is a GOP primary and he is being no Judas by supporting one person over the other. If Rubio gets it Jindal will back him 100 percent

The reason he is tapping aorund the question is why Vitter has been muted in his reponse.

Because the Budget ax that will come down will be devastating to and I mean devastating.

THe sad fact is conservatives missed the big question. That is why was Obama holding Louisiana hostage for something we needed.

I wish we had pursued that line