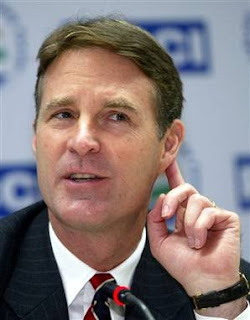 Now this is interesting:

Indiana Sen. Evan Bayh will not seek re-election this year, an unexpected decision that comes on top of other high-profile Democratic retirements.

The two-term senator is known as a moderate Democrat. His retirement gives Republicans yet another opportunity to pick up a seat in a year when several incumbent Democrats are considered vulnerable and some have already decided to jump ship.

Connecticut Sen. Chris Dodd and North Dakota Sen. Byron Dorgan both announced their retirements in January. Democrats are trying to defend open seats in Delaware and Illinois as well.

Former GOP Sen. Dan Coats had been planning to challenge Bayh in November. But a senior Democratic source told Fox News that recent polling showed Bayh way ahead of Coats, and that the retirement must have been a personal decision.

Bayh's staff said the latest polling showed Bayh ahead of Coats by 20 points.

Update: Wow! His replacement better be standing in the wings already:

Bayh's decision will set Dems scrambling for a replacement. The deadline to file to reach the ballot is tomorrow, meaning any Dem considering running for the seat must make a decision quickly.

"After all these years, my passion for service to my fellow citizens is undiminished, but my desire to do so by serving in Congress has waned," Bayh will say.

Sounds like he has other plans. Michelle Malkin asks,

Question: What’s Bayh going to do with his $13 million war chest?

Exit question: Who will replace him? HuffPo reports Ellsworth is a possibility:

A name floated by the operative as a possible replacement for the Democratic seat is that of Rep. Brad Ellsworth (D-Ind.) a blue dog from Evansville who came to office in 2006 riding an anti-Republican wave.

Firedoglake sees the writing on the wall: "Putting IN-Sen in play seriously raises the possibility of a Republican takeover of the Senate in November. It’s still a long shot, but definitely in the realm of the possible."

Update 4 (10:40 a.m.) Ed Morrissey makes a good point when he questions the reported "lead" Bayh holds in the polls. The recent entry of Dan Coats into the race might have changed that picture:

His “lead” was over state-level challengers, not necessarily Dan Coats, who hadn’t been in the mix long enough to get polled. Bayh couldn’t get above 45% against anyone, a bad position for any incumbent. The $13 million is a good point, though, and at least Bayh was competitive. Looking at Lincoln’s numbers, or those of Harry Reid, in comparison put Bayh in a relatively stronger position in his race, at least until he quit.

Update 5 (10:55 a.m.) Phillip Klein at American Spectator sees Bayh's exit as a move that will possibly make it more difficult to pass the health care bill:

One of the many implications Sen. Evan Bayh's retirement could have is to make it even more difficult for Democrats to pass comprehensive health care legislation. In the broader sense, news of a strong moderate Democrat feeling the need to step aside could make other red state Democrats even more nervous than they already are about reelection and thus uneasy about casting a tough vote. But more specifically, the most obvious Democrats to seek Bayh's seat are Indiana's Democratic congressmen: Reps. Brad Ellsworth, Baron Hill and Joe Donnelly. All of them have already voted for the original version of the House health care bill, and it's unlikely that any of them would want to cast another vote for the bill during a difficult race for the Senate.

Update (11:40 a.m.) Speculation is rising that Bayh might be considering a 2012 run against Obama as a challenger. I'd say this is unlikely, but stranger things have happened. Via Jonah Goldberg at The Corner, however, the possibility arises.
Posted by Pat Austin Becker at 10:05 AM