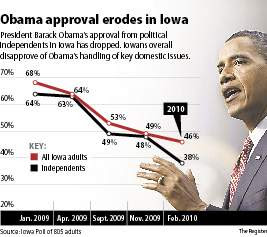 Update: Welcome Instapundit readers; thanks Professor Reynolds for the link!

Obama is back down to -19 in the Rasmussen Daily Presidential Tracking Poll; the only time his rating has been lower was on December 22, 2009 when he hit -21.

Part of this trend can be attributed to Obama's continuing loss of support from independents. The Des Moines Register explored the downward spiral:

A sharp drop in approval for President Barack Obama from Iowa's political independents has pushed the Democrat's approval further below 50 percent in the state and below the national average, according to the latest Iowa Poll. Approval among Iowa independents has dropped 10 percentage points since November, to 38 percent.

It is quite a shift from his position in November:

Forty-six percent of Iowans approve of Obama's handling of his job, according to the poll taken Jan. 31 to Feb. 3. That's down from 49 percent in November. It is also 22 percentage points lower than Obama's Iowa approval of 68 percent around his inauguration last year.

And on domestic issues:

In Iowa, views of Obama's handling of key domestic issues remain a problem for him. No more than 40 percent of Iowans approve of his performance on the economy, health care and the budget deficit, although the rates are essentially unchanged since the Register's last poll, taken in November. What has changed: The fractions of independents who support Obama's handling of all three of these issues have shrunk in the past three months.

The comments that follow the Register's article are particularly entertaining. A sampling (names removed):

It took a poll to tell you this?

I agree with that one!

I switched to Independent when the Republicans went squishy as compassionate conservative. When a party and it's [sic] candidates get serious about significantly shrinking the size, scope and power of federal government I'll support it and them.

I think that's why some folks are looking at The Tea Party as a third party or registering as Conservative. So many people are just sick of both major parties.

Independents are pulling away from Obama and the democrats just like they pulled away from the republicans and for the same reasons. Party politics and special interests both subscribe to the theory that enough money will purchase any election. Maybe they are going to learn that money is not necessarily votes. Independents are not allowed to participate in the selection of party candidates but they can and do pick the elected official. They are the votes that swing the election. So Dems and Reps if you want to win and keep it get off your far left and far right positions and run a moderate candidate.

Some folks are slow learners, fella. Don't get your hopes up.

It is quite embarrassing that Iowans are perhaps responsible for electing Obama to the presidency. I implored my fellow Iowans to look beyond flowery speeches devoid of substantive content. I will always believe that Hillary was the smart choice despite the media's brutal attacks upon her. Unfortunately we will have the choice of Obama or probably an extreme right winger in 2012. Here is hope that the Republicans or moderate minded independents will deliver a candidate that is a real alternative to Obama that common sense moderates can support-- someone who does not just talk about hope and change but can deliver change.

Another one looking for a moderate.

Oh and one more:

Obama is failing because he thinks we need to be herded not heard.

There are about 217 comments on that article when I last checked. It's interesting to see what Iowa voters are thinking right about now. I sifted through a large number of them - a lot of it is snarking back and forth, as one might expect in such an open forum, but many of those who left comments are looking for a true moderate, which is what, it seems, that they thought Obama would be.

I love that line about needing a poll to tell us that! I feel the same way. Obama started to lose voters early too. One teacher friend of mine lasted until he banged on LV right after he took office and told me that she would not vote for him again. And this is a black female to boot who is as liberal as I am conservative.

You can go back almost to the day when he said the Cambridge police acted stupidly and see his decline. That was the day he let his true feelings about the public show.