Little Barry Not So Popular in Indonesia 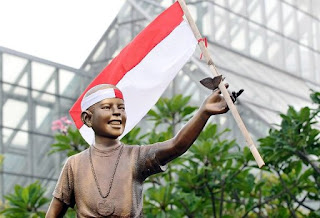 Some in Indonesia aren't so thrilled with the Little Barry statue and want it removed. A statue of Obama as a child was erected in Jakarta's Menteng Park last month but already there is a large group of critics who don't believe Obama should be so honored:

"We've been discussing for the past two weeks what to do with the statue... whether to take it down, move it elsewhere or retain it. We're finding the best solution," Jakarta parks agency official Dwi Bintarto said.

There is a Facebook page in protest of the statue and comments there suggest that Obama only lived there a few years and as of yet has contributed nothing to the Indonesian nation.

Maybe after Obama and family travel there this year, they'll change their minds. I'm sure a deep bow or two can make things right.
Posted by Pat Austin Becker at 9:36 AM

That's it! That's the issue right there! Obow-ma needs to extend some of that Western submissiveness to yet another foreign leader. Spot on!

Indonesia, like the rest of the world, got taken up by the American media's Obama-hype-- remember, they were selling action figures of this guy in Asia.

And now, much like the rest of the world, they're seeing Obama as full of hot air and mouthing hollow promises. His citizen of the world schtick is seen as nonsense since it's abundantly clear that he hasn't a clue about other cultures and is arrogant enough to not even know of his ignorance, let alone care.

I don't think Obama's statue remains because of any respect of love for Obama. Obama's lack of accomplishment and the tenous Indonesian connection is sinking in. But the Indonesian authorties would have to admit to a rather embarassing mistake based on teenage puppy love for putting up the statue in the first place. It's easier for them to talk up Obama than admit to a mistake based on media hype.