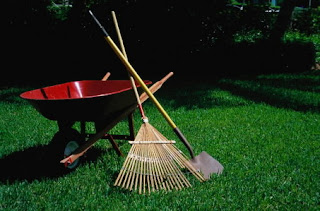 I'm getting spring fever. I know it isn't even March yet, but I'm anxious to get out in the yard and start clearing away the debris of winter. Leaves, sticks, dead things. That's my plan for this morning, anyway. It's supposed to rain later this afternoon and tomorrow, so I'm on a time crunch! Lets get right to the links!

First of all, Potluck. This will be a blog you'll want to check often through the day. It's the brainchild of Jill, aka Pundette, and there are now 11 authors on board with a few more in the chute. We're looking forward to growing and evolving over there and engaging in some good conversation. Fuzzy Logic has more on the birth of Potluck.

Fishersville Mike is flashing back to the 70s.

Legal Insurrection has the latest on Obama's declaration of legislative war and the Feb. 25 health care "negotiation" between parties. (It was hard to type that word "negotiation" in that sentence with a straight face.) Ruby Slippers believes the White House is simply "pathological" at this point about passing health care reform.

Stacy and Smitty have been doing some awesome coverage of CPAC. Bob Belvedere sums things up. Little Miss Attila is there, too, and has some thoughts on the acquisition of Hot Air.

Coffee Milk Conservative has a crazy post about DHS and their inability to keep up with their ... stuff. It's also cross posted at Potluck.

Bride of Rove takes note of Seth MacFarlane and Bill Mahar and their inappropriate humor.

Pundette posts on Obama campaigning for Harry Reid on your taxpayer dime. No Sheeples Here is more to the point - vote buying!

The Sundries Shack has video of Ed Morrissey at CPAC and his award.

Backyard Conservative is developing an appreciation for...curling? An intervention may be next.

Political Junkie Mom wonders if it's just time times in which we live that the president is actually writing legislation.

The Daley Gator has a photo of a house that a guy bulldozed to keep the bank from foreclosing on him. Well, I guess that's one way.

Carol's Closet has the video of Marco Rubio's CPAC address; I love this guy!

Troglopundit had a birthday this week!

Wyblog posts a graphic of Obama from Time Magazine and then deals with the critics.

Caught Him With a Corndog has been following and posting on the Austin plane crash story.

Okay, that'll be it for now. I've got leaves beckoning outside and clouds looming. Have a wonderful Saturday and I'll catch up with you later.
Posted by Pat Austin Becker at 8:41 AM

Thank you for the link and kind words, Pat. Will be linking.