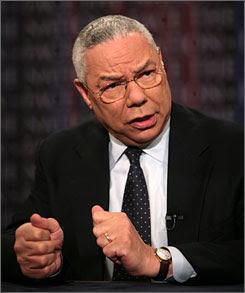 Former Secretary of State Colin Powell was on Face the Nation this morning expressing his continuing support for Barack Obama. Powell, as you recall, endorsed and voted for Obama and stands by that decision today.

From Powell's perspective, the problem with this administration lies not in the fact that the message or policy is wrong, but that the American people are to dense to understand it:

Former Secretary of State General Colin Powell said Sunday he had no regrets about endorsing Barack Obama during the 2008 presidential campaign, but that the president "put too much on the plate for the American people to absorb at this time."

We can only focus on one thing at a time, you see.

When asked if Washington is "broken," Powell said it's not broken but it isn't functioning very well:

"In some ways the government is functioning. It's doing what it's supposed to do, but not well enough. The American people, I think, see the extreme positions being taken, too left on the Democratic side, too far right on the Republican side, the Tea Party movement is also now become a force in American politics. Of course, you've got the overhang of cable television and the Internet, all of which heightens tension and makes it harder and harder for our political leaders in the Senate or in the Congress to quietly make the compromises that are necessary."

It seems as if Powell thinks television and the Internet are hindrances to good government, but thank goodness for them both because where would we be now without them? I don't think the American people really want Congress to "quietly make the compromises that are necessary." To many Americans that simply means "backroom deals" like Mary Landrieu's Louisiana Purchase.

Granted, some compromises have to be made, but by both sides. And sometimes there is no compromise to be found. One should not be expected to compromise their principles or values. We are taught to stand up for what's "right."

Powell did say one thing that I agree with:

"[Americans are] looking for leaders in both the Republican Party and the Democratic Party in the House and Senate to start finding ways to compromise and get the country moving and not just scream at each other."

I do think people are tired of the bickering, but that's just politics. That's how it's always been and always will be when you have differing opinions. People feel strongly about the health care issue, for example, and it's safe to say that there may not be a lot of compromise to be made on that issue. Certainly there is some, but many people don't feel the need to compromise their feelings on, say, abortion for example. It's not helpful to "scream at each other" either.

But when Democrats, Harry Reid, wave the heavy stick and say either pass health care the way we want it or we'll just push it through with reconciliation, how can one expect there not be a howl of indignation from the other side? Is THAT compromise?

Powell invoked the Founding Fathers in his appearance today and pointed out that even they had to compromise when writing the Constitution. But they didn't have Harry Reid and Nancy Pelosi to deal with.

And I guess as Powell sees it, they didn't have the Internet and cable TV either. But somehow I just can't believe we'd be better off right now without it!
Posted by Pat Austin Becker at 12:06 PM

Gee, that's not condescending at all.

Yes, thank goodness for the new media and the loud people who are screaming no to "compromise," which 9.9 times out of 10 means saying yes to terrible policies.

Now the Democrats are saying they want to compromise. BULL S***!
If they wanted a compromise they would have listened to some of what the Republican and Conservatives have been trying to interject into the process since the beginning.
Obama, Ried, Pelosi, and others on the far left mistook a four of five percent margin of victory as a mandate to push anything they wanted down the throats of the American public. They failed to realize that they won mostly due to Bush fatigue and the fact that the Republicans failed to run a viable candidate.
Now they realize that if they push this sugar coated dog turd called Health Care down Americans' throats they will pay the price. So, in essence, they want the Republicans to jump off the cliff with them and use the compromise as election fodder to tell the American public, "The Republicans a just a guilty for voting for Health Care."

Thank God for communication of all types and of bloggers like ourselves.
This president has shown that compromise is not part of his agenda.

Enjoy your ride on the Hindenburg, General

Quoted from and Linked to at:
Colin Powell: It's Dog Track Time