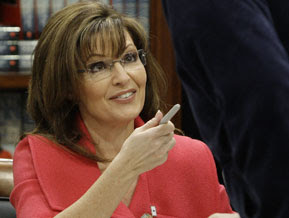 Dellinger sees Palin as one filled with "mean-spirited sarcasm" when she asks, “A year later, I've got to ask the supporters of all that, how is that hopey-changey stuff working out for ya?” of Obama's supporters.

I don't see it that way...I think Dellinger is reading to much into that question. I think it's a fair question to ask.

Laughing about – and at-- the disappointed hopes of fellow Americans, many of whom I saw stand with their children for hours and hours in inclement weather to see a candidate who gave them hope for a changed America, is not an expression of populism but of something far less appealing.

I'm not sure Palin was "laughing about...the disappointed hopes of fellow Americans" but rather I see her as trying to figure out how so many were pulled in by a man with no experience and no resume. All he came into office on WAS hope.

However, the time for debate over Obama's qualifications has past.

With unemployment still incredibly high and the deficit rising higher by the day, with national security at an almost pre-9/11 mentality, with all that is wrong in The White House right now, I think Palin asks a fair question.

And I don't think she's laughing.

What do you think?
Posted by Pat Austin Becker at 6:19 AM

Now you're "mean-spirited" and snarky. It's all just standard name-calling and marginalization. You see it on college campuses (and in the classrooms) all the time.

What does Dellinger think about the use of the term "teabaggers"?

I think if the left can't take it then they shouldn't dish it. Dellinger needs a new pacy.

I guess Palin does not understand satire and she complains about telaprompters, what a hypocrite. Palin’s hand job just shows all of us what kind of dullard we are up against, I have not seen this since junior high. She is so perfect for "Fake News". WOW and some call her a leader….please.

I know I will catch flak over this. I am probably more conservative than most people I know, but I know I will be called a screaming lib for what I'm about to say.

I like what Sarah Palin says, but a lot of people liked what Obama said, too. Obama talked a good game for his side, and I think Palin talks a good game for our side. But Sarah Palin is not electable, and if she so happens to get elected I think she doesn't have the capablilites to be the effective leader this country really needs.

Milton is a troll. He left the same comment, word-for-word, over at Carol's Closet.

I think if "Milton" is going to Copy and Paste his comment a bunch of times, "he" should at least construct "his" sentences better...

G.R., Sara Palin is the best thing to happen to this country! She needs to be president. You need to support her. When you mature in you political thought you will understand.
Robert

Without knowing a person and commenting on their political thinking process is a bit presumptuous don't you think? If you have read this blog, and my comments I’ve posted from time to time, you will see I am a conservative and support the conservative movement. But I believe this country is more important than any one politician or any one political party. This is about the lives of over 300 million citizens who depend on a few to lead this nation in an effective manner.

Right now we haven't had effective leadership, and we are suffering greatly for it. Just electing someone into office because they can say the right things is not effective leadership.
I stated the reason why I think Palin is unelectable. I like what she says, because she sounds like a Ronald Reagan conservative, which I am. I just think she doesn't have the capabilities or the necessary experience to effectively lead this nation. Will she as time goes by? Maybe, maybe not.

Unlike Obama, if Palin did get elected, I think she would surround herself with people who could advise her to make effective decisions, unlike what Obama has right now. But the person who has to make the final decisions better have the experience and knowledge to make it. As of right now, I don’t see it.

What are your reasons for thinking Sarah Palin should be president? You didn't say. Your comment was I need to support her. Why? Because you said so?

A mature political thought is more than a blanket statement, it gives a reason. What’s yours?

G.R. I didn't mean to offend you, but Sara speaks for the real working people of this country. I am just a working man from Arkansas and not rich like most RHINOS (like maybe you?).
Robert