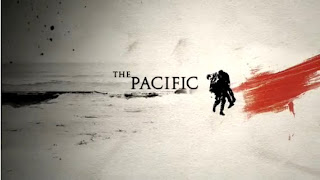 I guess I'm slow to hear about this upcoming mini-series from HBO - The Pacific. You can be sure I'll be watching this one:

Executive produced by Tom Hanks, Stephen Spielberg, and Gary Goetzman, The Pacific is an epic ten-part miniseries. The Pacific tracks the intertwined real life stories of three U.S. Marines: Robert Leckie, John Basil0ne, and Eugene Sledge across the vast canvas of the Pacific Theater during World War II. The miniseries follows these men and their fellow Marines from their first battle with the Japanese on Guadalcanal, through the rain forests of Cape Gloucester and the strongholds of Peleliu, across the bloody sands of Iwo Jima and through the horror of Okinawa, and finally to their triumphant but uneasy return home after V-J Day.

I'm a long time fan of Eugene Sledge's With the Old Breed which is one of the sources for this miniseries. I'm going to have to get busy on the other three: Helmet for My Pillow by Robert Leckie, and Red Blood, Black Sand by Chuck Tatum, and China Marine by Eugene Sledge.

This won't be everyone's cup of tea, so to speak, but I'll be watching.

Email ThisBlogThis!Share to TwitterShare to FacebookShare to Pinterest
Labels: television, The Pacific, WWII

Make sure you read Sea of Thunder if you like Military History.