And Finally, a Little Good News in the Gulf 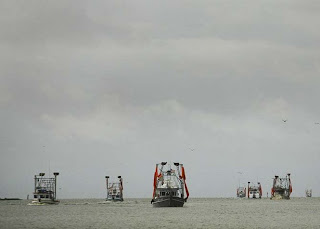 There are a couple of positive news items about the Gulf spill this morning, for a change.

First was the announcement last night that the Feds will accept 22 offers of help from 12 countries to deal with the clean up efforts.  Finally.  See Allahpundit's post on that for details; he's got the links to the charts and documents you need to see.  There are still a lot of offers still on the table, but, it's a start.

Also, news in NOLA this morning is that the Coast Guard and the EPA have relaxed a response rule requiring those skimmers to be elsewhere "just in case" they were needed.  This will free some of them up to work in the gulf.  See the NOLA article here.

Sen. George LeMieux, R-Fla., a vocal critic of the number of skimmers currently deployed, said the rule should help but comes late in the game.  "After waves of oil, tar and sludge-stained beaches, after families have lost their jobs, their business, and their way of life, we are finally beginning to see a sense of urgency from the federal government," LeMieux said in a statement. "I am glad the rule has been issued, but I wish this determination had been made weeks ago, when the oil could have been skimmed before it hit our coastlines."

But, it's an improvement.  Slow is better than nothing at all.

Check out this video at HoumaToday to see what kind of response a local official got when he called the BP oiled wildlife hotline to report a bird in trouble.  Press 1 for...press 2 for....you won't believe it.

And finally, this AP story about how the wetlands and estuaries are faring pretty well, considering.  That's hard to reconcile with the charts of dead fish and wildlife we've been seeing, or the oil covered birds, but there it is.  This report is conditional, however, on no big storm coming through and spreading oil all over creation down there.  That would change things.

But for now, it's nice to be able to report some positive steps so let's hope that pattern holds.

(Photo credit:  Chris Granger, The Times-Picayune)
Posted by Pat Austin Becker at 8:25 AM