Who Actually Gets Part of the $20 Billion BP Shakedown Fund? 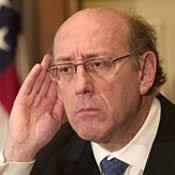 Confusion continues to abound in the Gulf.  The latest mess is with regard to the $20 billion Shakedown Claims fund which will be administered by Kenneth Feinberg.

Refresh your memory:  there are two escrow funds.  $100 million set up to compensate rig workers idled by the moratorium put in place by Obama.  We'll call that the "Moratorium Fund."  The $20 billion fund is "to help those affected by the disaster" so we'll call that the "Disaster Fund."

According to NOLA, Feinberg says "that individuals and businesses hurt by the drilling moratorium are not eligible for a piece of the $20 billion escrow fund BP set aside to pay all eligible claims."

So if you were hurt by the moratorium, don't come to him.  He thinks.  He's not sure.

If you were hurt by the moratorium and you're a rig worker, you need to talk to the guy handling the The $100 million Moratorium Fund.

Feinberg makes clear that the $100 million is strictly for "rig worker claims only - no small business claims, no ancillary claims, and it's not going to be replenished."

Feinberg said it is not yet clear whether the $100 million would be under his jurisdiction or managed separately. That is a decision that belongs with the White House and especially BP, and he said he expected that to be cleared up in the next few days.

The White House is confused, too:

White House spokeswoman Moira Mack has said that, "any individual or business who has a (moratorium-related) claim may submit it to the $100 million foundation or the $20 billion fund. Rig workers impacted by the moratorium will absolutely not be precluded from presenting claims."

Remember, the $100 million Moratorium fund will not be replenished. When it's gone, it's gone.  And it won't take long.  In addition to that, the IRS will be taking their share of the dough also.

Meanwhile, folks down on the Gulf are losing money and their livelihood while Washington figures it out.
Posted by Pat Austin Becker at 4:55 PM