An Oily Souvenir of the Summer of 2010 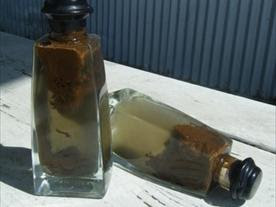 Update:  Instalanche!  LOVE it when I check my SiteMeter and it has some obscenely high number of hits!  Thanks, Professor Reynolds!

Gotta love those south Louisiana folks; being a survivor is in their DNA!

As awful as this oil spill is, they're finding ways to fight back, and often keeping a sense of humor about it.  The entrepreneurial spirit is alive and well.

Kevin Voisin of Houma is selling limited edition bottles of Louisiana seawater with BP crude in it for $1000.  Voisin and his family own an oyster business and are now out of work.  He's doing the bottles in his warehouse and only making a limited number of them with proceeds going to help fishermen who are now out of work.

1000 dollars can pay rent and groceries for a month for most of the families we are reaching out to.  The funds raised from the exclusive "Bottles of Hope" limited edition vials of recovered oil serve as the perfect metaphor for the thousands of lives that will begin to be reclaimed and recovered.  The 2010 Deepwater Horizon Oil Disaster was the insult to injury blow to people already stretched to the limits by Hurricanes, Katrina, Rita, Gustav, and Ike.  With your help, Horizon Relief will begin to make people whole so they can get back to helping themselves - there will be no hand outs, only a hand up to bridge the gap and a way back to work.

Of course, commenters in the NOLA story wonder how long before BP declares his operation a biohazard and shuts him down, claiming the oil is theirs, anyway.  *Groan*.
Posted by Pat Austin Becker at 9:34 AM

Congrats on the McCain linkback ;-)

Maybe if he reduces his price, he could sell a lot more; a la the 'pet rock' craze of the 70's or the 'Ash from Mt. St. Helens' fad years ago.

Sounds like it is money for a good cause, so I wish him well.