Obama Is "Not Resting" at Yet Another Gala 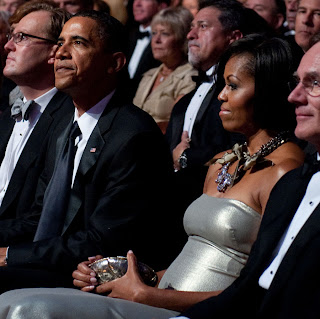 Did somebody forget to put D-Day on Obama's calendar?

We ought to be accustomed to this by now, and truly, what do we expect from this president?  Frankly, if he had actually acknowledged the 66th anniversary of D-Day or the sacrifices those men made that day, I'd have been shocked and I'd likely have looked upon it with suspicion.

Just as I was rather glad he sent Biden to Arlington on Memorial Day, I'm almost glad Obama didn't respond to D-Day.  He has no concept of what the greatest generation did in that war and any attempt to feign condolence or appreciation would be false.

But, what I do wish he would do is quit pretending like he gives a damn.  All this "I will not rest...." crap he is spewing about how he's focusing one hundred percent on the BP oil spill is balderdash:

And let me reiterate:  We will not rest until this well is shut, the environment is repaired, and the cleanup is complete.

He looks pretty restful here with his "Silver Fox!" wife, Michelle enjoying a gala at Ford's Theater last night.  Celebrities!  Photo ops!  Me, me, me!

No, what I want from this president is for him to just shut up.  Quit lying to us.  Quit acting like you care.  If you want to go to parties, galas, go golfing, host liberal tools like Paul McCartney in the White House, if you want to have date nights and attend fund raisers, get another job.  The hypocrisy of it bores me now.  Move over and let somebody who actually gives a damn about this nation, its past sacrifices and its present troubles, actually do the job.

You're disgraceful and you disgust me.
Posted by Pat Austin Becker at 9:43 AM

You have voiced what many hundreds of thousands are thinking.

Awarded the THE RIGHTEOUS RANT OF THE DAY at:
The Camp Of The Saints