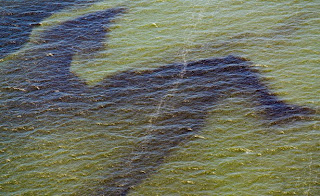 The Nanuq is a 300 foot oil recovery boat sitting idle in Alaska.  It's an American vessel and could be put to work immediately.  No Jones Act issues.  It would, however, take about 25 days to get to the Gulf:

Via KTUU in Alaska on Friday, June 25:

Shell built the ship in 2007, and says it's one of the most advanced skimming vessels of its kind in the world.

"She's definitely the largest that we know of," said Shell Alaska's Susan Moore. "She's got 12,000 barrels of storage, which is above and beyond what most other oil spill response vessels around the world have."
With Shell's offshore drilling plans this year put on hold by the Obama administration, the Nanuq won't be needed in Alaska this year. But all it takes is a look at news headlines to find oil cleanup work.

"I saw the pictures of the wildlife in the gulf. This is terrible, and the company's going to put its full might behind providing every resource it can to stop it, clean it up and restore the gulf," said BP managing director Bob Dudley.
BP expressed interest in using the Nanuq to help clean up the Deepwater Horizon spill, and Shell says it was in the final stages of a deal which would have sent the ship south. But for some reason BP recently backed out, and Shell says it can confirm that BP no longer plans to use the ship.

"I can't tell you why BP decided to pass on the Nanuq," said Shell spokesperson Curtis Smith. "Of course it's our preference that it be working in the gulf, but it will remain available should BP reconsider."

Yesterday we learned that BP has purchased the ship and is disassembling it's containment system in order to install it on another ship:

BP spokesperson Robert Wine confirms that the company purchased an Ocean Buster oil skimmer from Shell Oil. Wine says the company can easily pack the containment boom and ship it to the gulf, where the company plans to install it on a different vessel.

What I'd be interested in knowing is how long did BP know about that ship sitting up in Alaska, now idled by  the Obama administration, and why did they take some 70 days in taking action on it? Did it take as long to complete the sale as it would have taken to move the ship to the Gulf?
Oh, and remember the A-Whale?  Heritage reports on the problem with the giant skimmer (emphasis mine):

The A-Whale is the essence of an international ship—built in South Korea, modified in Portugal, owned by Taiwanese and flagged in Liberia.  And that is part of the problem.  Even if it stays farther offshore than the 3-mile limit of America’s Jones Act, it still requires approval by the U.S. Coast Guard and Environmental Protection Agency before BP can hire the A-Whale and put it to work.

The second problem is that the ship would gather spilled oil, separate the water from the oil, and discharge the water back into the ocean so its tanks could be filled with oil.  Our EPA has a problem with that, because the discharge would retain a minor amount of oily residue.  To EPA, any residue greater than 15 parts per million is impermissible.  They elevate perfection above the need for speed.

I'd rather be dealing with a little oily residue than the gunk washing up on the shores and into the wetlands now.

Posted by Pat Austin Becker at 9:46 AM

And people wonder why Louisiana is screaming about this? I have read nothing nowhere combatting the reason for the lack of response. Nothing but silence from up top. Who are the "useless eaters" now?

Great work on this issue, Pat.

And thank you for making me the FEATURED BLOG.