Take a Trip to Jefferson, Texas

It was so hot, my picture taking mojo wasn't even working, but I'll share a few with you.  We took Steve's old buddy Bob and his family to Jefferson because they'd never been there.  Bob is from New Jersey.

We left around 10 this morning and arrived around 11.  Our first stop was the General Store.  This place has everything.  It opened in the 1870s as a hardware store and today has everything under the sun including a five cent cup of coffee. 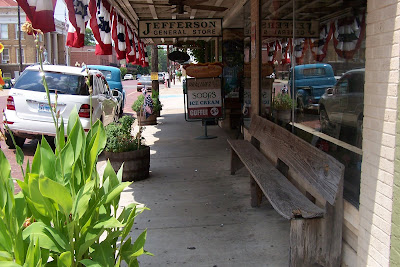 They also have an old fashioned soda fountain where you can get floats, shakes, chili dogs.  You can sit at one of the tables already set with a checkers game ready to go. 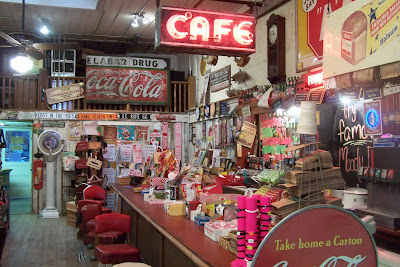 From there we walked down to the huge antique mall, but it has no air conditioning and the overhead fans just weren't getting it.  Steve and I have gone in there before and it's an awesome place to poke around and find treasures, but it was just too hot today. 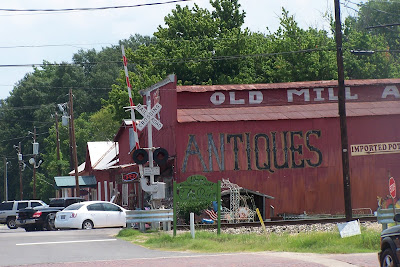 We decided it was time to sit down in the AC and get some lunch so we headed to my favorite, Auntie Skinners.  I had a club sandwich and I think everyone else had burgers.  Steve and I both enjoyed a cold Sam Adams Boston Lager on draft.  You can tell by the picture it was a slow day; usually the place is jammed, but on a 98 degree Wednesday at 2:00, it was slow. 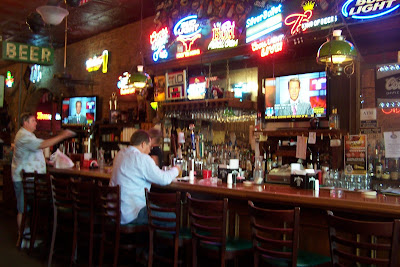 We had Bob take our picture outside. 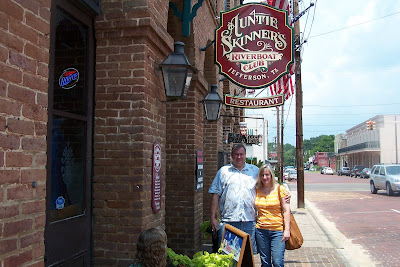 There was this guy standing behind Bob waiting for him to take the picture before he went inside; I told Bob, "Don't take it if I look fat!"  The guy said "You don't look fat; you look just lovely and I'd be hittin' on you but that guy's bigger than I am!"  It was funny.  People are friendly there.

After lunch we went to the Excelsior House, which has been in operation since the 1850s.  Lots of famous people have stayed there; in the lobby they have the guest register signed by Ulysses S. Grant and by Oscar Wilde.  I took this lame picture with my phone where George and Laura Bush stayed there in July 1996: 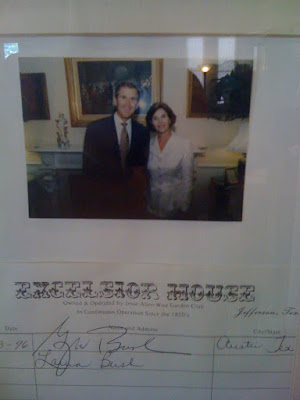 One of the things I really love about the Excelsior House is sitting outside on the front porch just watching the slow traffic go by.  Even though it was hot today, it was very relaxing. 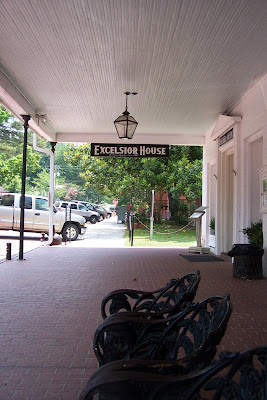 Bob wanted to take the Jay Gould Railroad Car tour, so we did that; as many times as Steve and I have been to Jefferson, we've never toured the railroad car.  It was really interesting and cool.  I could totally have traveled across the country in style in that thing!  Our guide, Sarah, was very knowledgeable and answered every question Bob had for her, and he had a lot!  In short, Jay Gould was a self made millionaire by the time he was twenty-one.  He grew up without any money but learned every trade and skill he possibly could and made his fortune.  He got into the railroad business and wanted to run his railroad through Jefferson.  His proposal was rejected because it would have meant tearing down most of the important buildings there.  He got mad, put a curse on the town and moved on.  But his private railroad car is there now and is open for tours:

This was Mrs. Gould's bedroom: 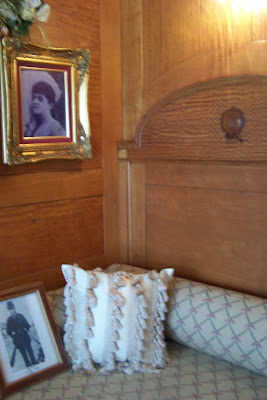 and his adjoining room; the rooms were connected with a full bath complete with a claw footed tub. 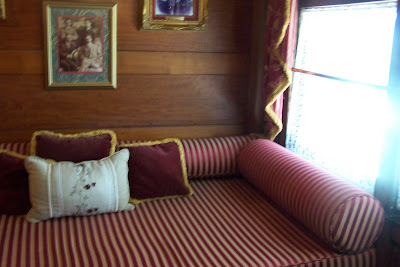 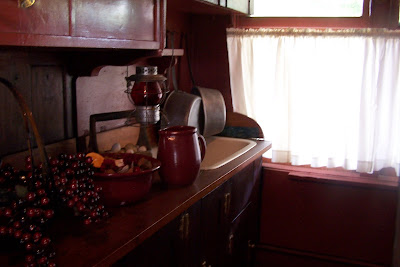 And a kind of sitting room where Gould also conducted business: 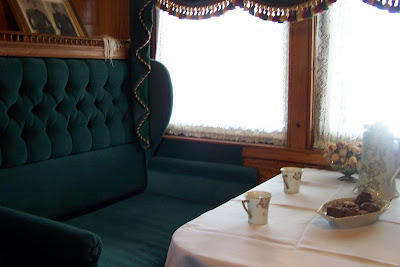 There was a dining room at the far end of the car, but there was no table in it.  Our guide said there would have been a table with eight chairs and a sofa when Gould had it.  The original silver serving pieces were in a glass fronted cabinet.

Here are we tourists on the car: 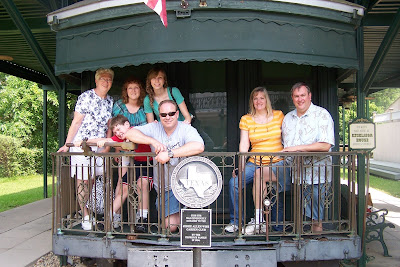 After that we hit a couple more antique shops and the Fudge Shop.  We drove around town a little, looking at the neat houses, and then headed home.  We got back in Shreveport around 5:00.

We had a good time but next time, we'll go when it's a little cooler!
Posted by Pat Austin Becker at 7:38 PM

Pat, I thought you didn't have your picture taking mojo going.

Good shots for a wo' out tourist.

This is great! These old towns are so special. We're at Parris Island right now but I'll definitely link it when we get back :-)

i should email you the pics from the time steve took us to jefferson, texas. i think josh was 2 years old.