Strasburg Takes it On the Road Today 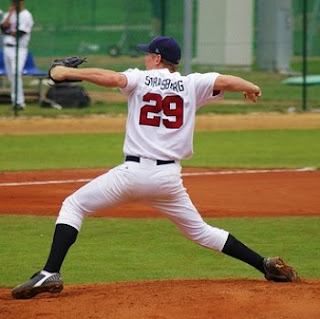 Stephen Strasburg takes it on the road today against Cleveland!  From USA Today:

Stephen Strasburg is expected to draw a huge crowd to Cleveland today for his second career start.

Strasburg set a franchise record in his debut on Tuesday with 14 strikeouts in seven innings for the Nationals. That came in front of a full house of more than 40,000 in Washington.
Since then, Strasburg has appeared with David Letterman, had at least one hamburger named in his honor and sold tickets.

Since June 2, when Strasburg's pitching schedule showed he'd probably start here today, the Indians have sold about 10,000 tickets for the game. They expect a crowd of between 30,000 - 35,000, which will be their largest since their opening day sellout. TBS has picked up the game for its national telecast today.


Woot!   If you haven't seen this kid pitch yet, you should tune in.

Fantastic!
Posted by Pat Austin Becker at 11:07 AM