On the Presidential Image I wonder how looking at this picture makes Mike Ellis of Harvey, La. feel?  Or Capt. Richard Garner?  Or the 50,000 people expected to be out of work because of the moratorium on deepwater drilling in the Gulf?

At the risk of repeating myself, even George W. Bush, who wasn't nearly as stupid as the liberals wanted you to think he was, realized the importance of image.  He quit playing golf during the Iraq war because he said,

"I don't want some mom whose son may have recently died to see the commander-in-chief playing golf," he said. "I feel I owe it to the families to be in solidarity as best as I can with them."

This is an attitude completely lost on Obama whose idea of image is something else altogether.   There have been a couple of good videos about Obama's lackadaisical response to the gulf oil disaster, but for me it comes down to distilled images. 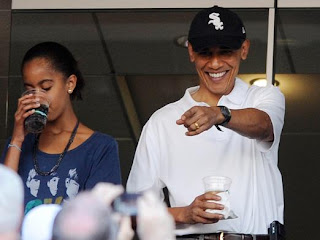 And you have this. 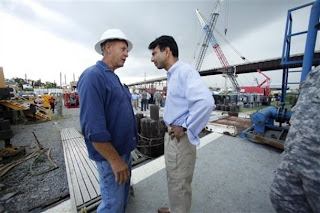 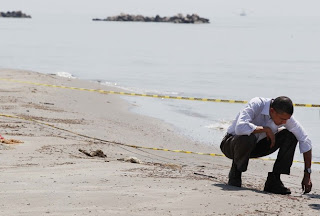 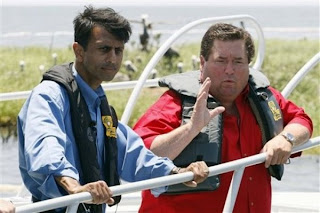 The image of President of the United States should be one of dignified and responsible leadership rather than a mockery of the office with one who blathers about kicking ass.  Yesterday in Ohio, Obama poked fun at Joe Biden's earlier gaffe, saying the stimulus work in Ohio was "a Big....Deal."  He didn't have to say the word for you to hear it.

Presidential?  I don't think so.

This is one of the things that just galls me about Obama; his total disregard for the image of the office.  He doesn't care what people think about the President of the United States; he cares about what you think of him, though.  He sees himself as above the office.

He has no leadership skills.  A leader would not be attending parties, baseball games, fundraisers, concerts, picnics, and playing golf while the worst environmental crisis in the nation's history is unfolding.  Even if he can't "suck it up with a straw" himself, he doesn't need to put himself in front of the cameras enjoying the high life at every opportunity.

Stay home, Mr. President.  Consult with experts.  Figure out a solution for this mess.  Watch baseball on television.  Adopt an air of dignified compassion and concern rather than yukking it up with a beer at a baseball game.  It doesn't make anybody feel better to see you hosting a Cinco de Mayo party, going to the theater, or schmoozing with Paul McCartney and Bono.

And for crying out loud, spend Father's Day at home with your kids tomorrow and leave the golf bag in the closet.

I can't believe you said that, "stay at home and consult with experts". Do you realize that every time he does that, we are hurt as a result? Encourage him to go to the games, encourage the congress and all the president's men to go out and have a good time at our expense. That way they will not be thinking about how they can "help" us.

Oh, by the way, Bush was a liberal. The only thing conservative about him was his religion and that was not mainstream.

Party on, Prez. It's good for the conservative cause.

Yeesh, Pat. Stop giving him advice already. He's not right in the head.

Apparently, those who brought-up Barry and those who have worked with him since have all done a Mr. Rogers on him and said ‘You’re special’.

Awarded the THE SPOT-ON QUOTE OF THE DAY at:
The Camp Of The Saints