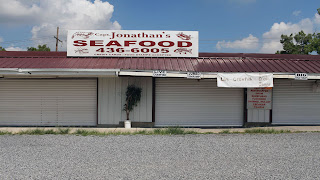 NOLA has an editorial today in opposition to the six month drilling moratorium which clearly states how devastating this move by the administration will be.

The thing about the moratorium that the administration doesn't seem to get (or maybe...they do...) and, which I've tried to express before, is that it isn't just the workers on the rigs who will lose their jobs.  When Obama does a "shakedown" on BP and they agree to open a fund for those "affected" by the shutdown, does it also include support for those "people in oil-related jobs" who "earn their livings on tugboats and supply boats and in shipyards, helipads, catering kitchens and other places on shore"?

NOLA calls the administration's move "myopic" and, indeed it is.  What it really is, though, is even still more evidence that this country elected the wrong leader.  An experienced man, a man with background in running a business, or making a payroll, or managing something more complicated than a campaign, would have forseen that a six month shutdown of all drilling in Gulf waters would simply cripple the Louisiana economy.

This is yet more evidence that when we elect leaders, charisma and rhetoric is simply not enough.

Even the fund BP is required to set up wasn't even properly considered (besides the legal issues, I mean); from NOLA:

In all, 18,000 to 24,000 jobs related to the 30 shuttered rigs across the Gulf are in jeopardy from the drilling moratorium. But this fund, which BP agreed to provide, targets only 6,000 to 8,000 Gulf Coast residents who work on the rigs themselves. Those workers make an average of $2,400 a week, counting benefits, which means the fund could dry up in as little as six weeks, with months left before the moratorium ends.

Dandy.  Now add to that:

According to the LSU Center for Energy Studies, Louisiana residents account for 3,339 of rig workers who are likely to lose their jobs, but another 7,656 Louisianians who work in jobs related to drilling also face likely layoffs. That's 10,955 people who stand to lose their source of income, joining the fishers, shrimpers, oyster harvesters, charter boat operators, seafood processors, restaurateurs and many others whose livelihoods have already succumbed to the oil spill.

Does this fund include just the rig workers, for which it will already be insufficient, but will it also include these others?  All they have to look forward to is 99 weeks of unemployment checks. And if you're a self-employed shrimper, how are you supposed to get traditional unemployment?  How are you supposed to find another job in an economy where nearly 11,000 have also joined you in the ranks?  Other estimates say 40,000 will be out of work.

There was a rally in Houma, Louisiana yesterday against the moratorium.  About two hundred people came out to protest and even a sudden rainstorm couldn't stop them.  People at that rally are already feeling the effects of the shutdown and children's author Patsy Powell said, "We are all in the oil industry, whether we work at a school or a snoball stand.”

Louisiana legislators have unanimously voted to declare today a statewide day of prayer:

"Thus far efforts made by mortals to try to solve the crisis have been to no avail," state Sen. Robert Adley said in a statement released after last week's unanimous vote for the day of prayer. "It is clearly time for a miracle for us."

I'm all for miracles because that is, indeed, what it looks like we'll need.

God Bless our southern neighbors as we are still the United States of America and have not yet seen the devastation move up the coast. I have not seen any coverage of the rally, but then again I live in the state of Congressman Ed Markey..... for both I am sorry.

Obama and group "get" what they are doing. That is the problem.

Prayer and right action will help tremendously. Having a governor who has the balls to do what is right for his state instead of kowtowing to what the fed wants; having a state legislator full of folks who will back his play; citizens who have been ready to take action now, is what's going to make the difference. What's the saying? God helps those who help themselves?