Make of This What You Will 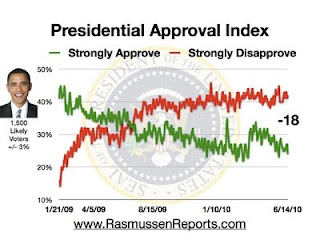 This isn't an all time low, but it is indicative, I think, of how people feel about Obama's handling of the oil spill.  He's planning on using his bully pulpit Tuesday night to press for his new energy plan which, I suspect, won't go over well with the folks.  Most rational people understand Obama isn't Aquaman (he reminded us of that, just in case) and can't part the waters and plug the damn hole.  But we do want a leader, someone to move us out of this crisis and reassure us that it will be okay.  We don't need another angry, thin-skinned speech by this guy.

Rasmussen also reports in this poll that 58% of those polled want Obamacare repealed.  Now that the details are coming out and the complaints from the critics are being proven true, the health care bill is more unpopular than ever.

I wish they'd ask how many people think Obama should play another round of golf.
Posted by Pat Austin Becker at 9:43 AM

Obama-Speak, the fusion of sophistry and Newspeak. Some see it as a gift, most see it for what it is, just lies.

There is a group of people in America that rolls in obama's dung as if it was sugar - and then there is a group who are in denial that he could be THAT BAD. They're hoping for some miracle that will tell them that they didn't cast a vote for the worst president in US history. Still another group is black and because obama is of mixed race, they are content that he loves them.

Then there's everyone else.

I suppose he is going to tell us who's ass he's gonna kick.