FLASH for Peggy Noonan: Obama Is Not "Snakebit"; He's Incompetent! 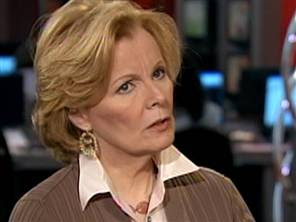 I lost patience with Peggy Noonan long ago.  So long ago that even now, when she says things that I might agree with, it irritates me.  She was so rhapsodic about Obama and his glowing, glorious potential...this rising moment in post-racial American history to elect such potential, such rhetoric!  Such possibility!  Bah.

So now, here is Mrs. Noonan with a column on our poor "snakebit" president. "It isn't Mr. Obama's fault that an oil rig blew in the Gulf and a gusher resulted," she says.  Well, except for the fact that his administration, via the MMS, gave BP authorization to proceed with the Deepwater Horizon rig even though all the paperwork and studies weren't in place:

Federal documents show that the Department of the Interior's Minerals Management Service (MMS) gave BP a "categorical exclusion" on April 6, 2009 to commence drilling with Deepwater Horizon even though it had not produced the impact study required by a law known as the National Environmental Policy Act (NEPA). The report would have included probable ecological consequences in the event of a spill.

So, while technically it's not his fault, there is still that pesky issue of "the buck stops here" and all that.

Not only is Team Obama "unlucky," you can add unprepared to the mix considering the fact that, as Mrs. Noonan says, they "hadn't anticipated a spill this big."  Well, why not?  After the Exxon Valdez did nobody have a clue this could happen again?  After the 1993 Persian Gulf spill, we still didn't consider a proper cleanup plan?  Or environmental study?  Team Obama picked up no lessons at all from the spectacular clean up of that disastrous spill?

No, Mrs. Noonan; I don't call that "snakebit"; I call it stupid.  I call it arrogant and unprepared.  I associate that with lack of experience and vision.

Even immediately after the spill, while Bobby Jindal was screaming for boom and the administration was assembling academics, Noonan says:

The first weekend in May, when water was rough, contractors hired by BP to lay boom "mostly stayed ashore," according to a local official. "Shrimpers took matters into their own hands, laying 18,000 feet of boom," compared to about 4,000 feet by BP's contractors.

The "little people" were doing the heavy lifting while the beleaguered "snakebit" president assembled a team of consultants. He delegated cleanup to BP even though they were clearly overwhelmed with capping the spill.

About the only thing I actually agree with Noonan about with regard to the speech was the ridiculous hand gesticulations he made.  It was terribly distracting and looked over-coached:

Throughout the speech the president gestured showily, distractingly, with his hands. Politicians do this now because they're told by media specialists that it helps them look natural. They don't look natural, they look like Ann Bancroft gesticulating to Patty Duke in "The Miracle Worker."

But, in the end, even this goes to his lack of competence and inability to foresee danger.  Rather than have a hard copy of the speech in front of him, an aide was off camera with one in case the teleprompter broke.  Even Noonan points out how odd it would have looked had Obama suddenly stammered, lost his way and reached for the hand just off camera with a hard copy of the speech.

Noonan is still, however she may try not to be, sympathetic to Obama.  She feels sorry for him:

And seems so snakebit, so at the mercy of forces. When you're snakebit you get some sympathy, and some will come.

It will never come from me.  Never.  Not as long as I have blood pumping through my veins and a breath left in my body I will NEVER feel sorry for this man for what he is doing to my country.  Never.  Ever.

He's not "snakebit."  He's not "unlucky."  He's supposed to be competent!  He's supposed to be a leader qualified to hold the office of President of the Untied States.  You don't get the luxury of passing your ineffectiveness off on being "unlucky."  The guy on the golf course who gets struck by lightning might be unlucky.  But not a president who fails to act properly during the worst economic crisis our country has ever known.

Not an option.  Not acceptable.  And Peggy Noonan's excuses are not acceptable any longer, either.
Posted by Pat Austin Becker at 8:11 PM

Wow! You are on a roll in this one! I share your passion!

Obama's hostage crisis, hold the Gulf hostage until he gets cap and tax passed. No one could be this stupid on purpose.