Why Hasn't the Obama Administration Granted Waivers to the Jones Act? 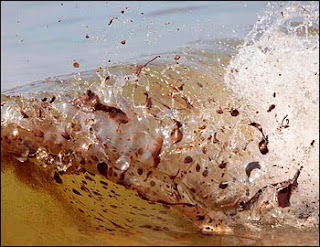 Last week I wrote about The Blue Seals and their proposal to put out of work commercial fishermen and retired vets back to work building Ecoceane boats to help clean up the BP oil spill in the Gulf.

There are several hurdles that must be overcome for the plan to get rolling and one of those, I reported, is the Jones Act. The Ecoceane boats are a product of the French; the French would have to operate the boats until American workers could be trained.

The first issue is getting the federal government on board for the boat building program and getting approval to operate the program.  This is where Congressman Filner has come in to help.  Bill Morgan of the Blue Seals explained one of the obstacles to me:

"The Jones Act is our largest obstacle to our plan with Ecoceane right now, because the boats are currently owned and operated by the French.  Initially, we would need to use existing boats and some of their crew people, until manufacturing could be put into place and American workers trained.   We are working with Congressman Bob Filner to get some kind of exemption from or temporary waiver of the Jones Act, so we can bring Ecoceane boats in."

The Hayride has a post that addresses the problem of the Jones Act:

The Jones Act specifically prohibits foreign vessels from sailing from one U.S. port to another. The purpose is to protect U.S. flagged vessels from competition by foreign flagged vessels. The argument to be made about this law’s interference with free enterprise is for another day.


Admiral Allen indicated that waivers can be authorized but only for one ship at a time and only through very cumbersome bureaucratic system. This is simply unacceptable.

Here is the Fox News link referenced by The Hayride.

My question is, why hasn't this already been done?   Not just for the Ecoceane/Blue Seals project, but certainly there are other nations willing to come in and help. There are, in fact, foreign nations pitching in, but as Fox reports, those are technologies largely transferred to American ships. For all those foreign nations that are helping, there are many more that can not.  Fox reports:

"Yes, it does apply,” said ONeil,“ I have heard no discussions of waivers.”

Potluck Bloggers echoes this report and links the transcript:

From a transcript released by the White House of the daily press briefing with Coast Guard Admiral Thad Allen, we learn that some of the best dredgers and skimmers from countries like Belgium, The Netherlands and Norway are being kept away from clean-up efforts in the BP oil disaster in the Gulf of Mexico because of the Jones Act—a protectionist law that requires vessels working in US waters be built in the US and be crewed by US workers.

George W. Bush granted waivers following Hurricane Katrina. When asked, Admiral Allen says he has not been approached about a waiver;  Robert Gibbs says waivers "would be considered."  What's to consider?

Joseph Carafano of The Heritage Foundation sees conspiracy in the mix:

Carafano believes it may have something to do with the Obama administration’s close relationship with labor unions.

“Cause this is a big thing for unions,” Carafano said. “The unions see it as … protecting jobs. They hate when the Jones Act gets waived, and they pound on politicians when they do that. So … are we giving in to unions and not doing everything we can, or is there some kind of impediment that we don't know about?

Posted by Pat Austin Becker at 9:18 AM

I say let the ships come, waiver be damned. It would be nice to see some common sense tactics take hold just for once.

Obama's incompetence knows no bounds. Hasn't he proved it?

First off the well should have never been approved with a single casing design. It goes downhill for MMS from there.

The Saudis offered early on to supply tankers equipped with oil skimmer booms to contain the spill around the well, like they did after the Kuwaiti War ... But they said no!!!

The government's own law states containment is the best solution, hours matter after the event itself, not weeks and months.

And the stupid ordering of BP around, heck that is what the law was designed to cut out ... put Obama in charge and have him give the orders to control the spill Cut the red tape.

Yes, I live on the Gulf, right in the path ... It's disgusting to watch our Keystone cops government act -- The only good spot they transferred the Katrina cleanup people to health-care so there won't be any problems.

10ksnooker,
Obama has said he will kick someone's a**, that should be enough to satisfy all of our concerns. I am sure his committee of college professors has considered all these options but found them lacking as Obama is going to kick their a**. Agian we should feel safe in our homes that he is actively taking control of the situation. The bypass the Jones Act would be silly, as Obama is going to kick a**. We should just go to our jobs and be content. Wait, the jobs are not there. But he will make sure that someone pays us and cares for us, after he kicks their a**. We don't need oil anyhow. You would only use it to drive to work and he has eliminated that concern. We should feel proud that we have produced such a man as Obama and his dilligent teams of college professors.