The Blue Seals Have a Plan for The Gulf Coast 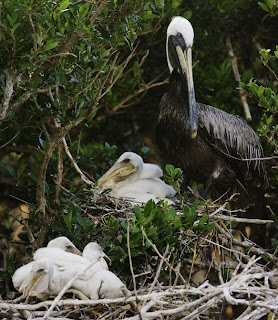 The environmental conservation group, The Blue Seals, is teaming with Veterans' Affairs in an effort to hire unemployed veterans to work in south Louisiana to help clean up the BP oil spill.

Congressman Bob Filner (San Diego, CA), Chairman of the House Committee on Veterans' Affairs, announced yesterday in Kenner, Louisiana, a plan to create a program to hire unemployed veterans and commercial fishermen to build "specially designed boats with patented technologies designed for cleaning up oil spills, for help with the Gulf of Mexico oil spill disaster." The Blue Seals hope to use one of the shipyards in or around New Orleans as a base of operation.

The Blue Seals is an ocean conservation group founded by activist Peter Brown, famous for the "Whale Wars" television show on Animal Planet.  Brown is also a documentary filmmaker and an experienced seaman.

Initially, The Blue Seals planned to film the oil spill in order to document the impact on ecosystems and wildlife, however, BP, under the guise of "safety concerns" has limited their access directly around the spill; The Seals do have access to some areas around the spill.  Peter Brown's frustration was evident in this statement on May 18:

"Our services were rejected as expected," said Brown from Venice, Louisiana. "It is obvious that BP does not want pictures of dead animals. BP has been very successful so far in controlling the story. Government officials and the bird group do their best to talk privately, and when they return at night, it is all very secretive."

Despite these few hurdles, the group plans to persevere.  The first issue is getting the federal government on board for the boat building program and getting approval to operate the program.  This is where Congressman Filner has come in to help.  Bill Morgan of the Blue Seals explained one of the obstacles to me:

"The Jones Act is our largest obstacle to our plan with Ecoceane right now, because the boats are currently owned and operated by the French.  Initially, we would need to use existing boats and some of their crew people, until manufacturing could be put into place and American workers trained.   We are working with Congressman Bob Filner to get some kind of exemption from or temporary waiver of the Jones Act, so we can bring Ecoceane boats in." 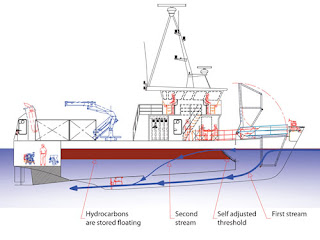 As to the boats, the Ecoceane technology basically captures the water, runs it through a hydrocarbon separator and spits out the good, clean water, and keeping the polluted water.  There's more on how it works here and a little history of the company, too.  Ecoceane has several models, seen here,  that can be used in this kind of operation and at this time they are still working out which model of boat will be best suited to the call of the Gulf.

When all the kinks are worked out veterans would go through an application process, probably, Morgan explains, through the non-profit US VETS.

Right now, many of the locals are none too happy with the opportunities  from BP to work:

Steve Shook is a commercial fisherman from Galliano. He contacted BP weeks ago to inquire about the Vessel Of Opportunity Program, documenting his conversations with them along the way. Shook says a BP official, impressed with his resume, asked him to run the program for his parish ... which he accepted. That was on Friday. "Monday I woke up ready to go to work all excited and everything, made a call, called Judy, she was in Houston and she says, "Look Steve, I'm sorry but we're going to have to hire someone from Houston," Shook explains.

As I wrote earlier, some of those involved in cleanup have become sick from the fumes, possibly also from the dispersants.   Advocates like Erin Brockovich have come in to help and advise locals on those issues.  Now, the Blue Seals are hoping to make a difference and help put some of these people back to work.

Along with the plan to build the Ecoceane boats, the group has brought along actor David Charvet, who is on the Blue Seals Board of Directors, and his fiancee, Brooke Burke.   They plan to fly over the coast and affected areas documenting their findings:


The crew will fly a specially modified Albatross seaplane to areas of the Louisiana coast to document the devastation to the coastal environment.

For right now, they are collecting as much film as they can and putting short videos on their website.  There may be a feature length documentary later, but right now their priority is saving the marshes, estuaries and wildlife in the fragile wetlands.  The rescue center at Fort Jackson has reported 415 oiled birds coming in since the well blew in April.  There are others coming into rescue sites in Alabama, Florida, and Mississippi.

Hopefully the Blue Seals and Ecoceane partnership will bring better opportunities for work to struggling communities and families as well as a rescue for a fragile and damaged ecosystem..  If you'd like to donate to their operation, go here.  There are other ways you can help here.