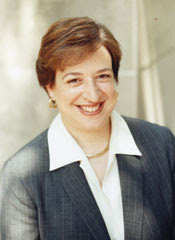 The Elena Kagan dog and pony show begins this week.  The hearings should actually be fairly informative as we just don't know that much about her and she has, by tradition, remained silent since her nomination.

There are some handy guides to bring us up to speed on her, however, starting with Human Events: A User's Guide to the Kagan Hearings.  This offers a rundown of Kagan's biography and some of the subjects that are likely to come up such as her anti-military views and her judicial philosophy.  There is also a link to the  New York Post article by Professor Glenn Reynolds in which he called Kagan "a wise choice," a backhanded compliment to be sure as he was in fact referring to Obama's weakness in the polls when he picked her.

George Will has some questions for Kagan.

Michelle Malkin has a plethora of links and declares it Kagan Kabuki Theater.

Politico analyzes their perception of the Republican "line of attack."

Stacy McCain has links for the "Kagan Confirmation Circus."

And go back a bit to Legal Insurrection in May, So Why Am I Already Defending Elena Kagan?

And of course, there's always Memeorandum to keep you up to date.

Keep your eyes on the ball, folks.
Posted by Pat Austin Becker at 9:51 AM