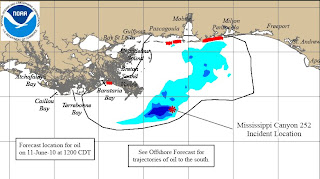 According to NOAA, here is the latest trajectory map for the BP oil spill.   Obviously this is just catastrophic for the entire Gulf.

Oh, did you hear?  The Obamas had a picnic last night on the White House lawn with a guest list of some 2,000 congressional members and family members.

While they're doing their studies, the Louisiana economy is tanking.  Tom Bonnette of The Franklin Sun is not impressed with Obama's response.  James Carville is still angry. 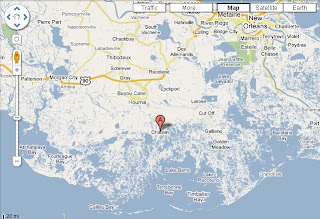 In Lafourche Parish nine local fisherman have gotten sick by, they believe, the fumes.  Consumer advocate Erin Brockovich has come down to meet with them and provide assistance and advice to locals on protecting themselves against chemical contamination.  Unable to fish the oil polluted waters, the fisherman have begun working in the cleanup efforts but the air quality is so poor it's leading to more problems.

There might be other problems, says chemist and environmentalist Wilma Subra of New Iberia. On Monday in Chalmette, Subra, representing the Louisiana Environmental Action Network (LEAN) and Lower Mississippi Riverkeeper, told the Subcommittee on Oversight and Investigations of the House Energy and Commerce Committee that fumes from the BP gusher have been affecting fishermen hired by BP contractors to pick up the crude oil. The workers are already reporting headaches, nausea and respiratory problems, she said. Long-term effects can be the development of cancer, heart and lung problems, Subra said.

Not much has happened except for a few Obama photo ops.

Has Obama spoken with Tony Hayward of BP yet?  In this interview with Matt Lauer, Obama explains he hasn't spoken with Hayward yet because "he's gonna say all the right things to me.  I'm not interested in words.  I'm interested in action."  Really?  Seriously?  Is poking your finger in the sand on a sanitized beach "action"?

And what of the miles of oil boom sitting in that Maine warehouse?  Why hasn't Team Obama taken charge and picked that up?  Jindal has been screaming for it for weeks.

I so agree with you. He has absolutely no idea what he's doing or what he ought to do, for that matter.

I bet that was one 'kick ass' picnic.

Maybe he meant he was going to have an 'ass-kicking' picnic as opposed to physically, euphemistically, and legally taking on the parties responsible for this oil debacle.