The Ladies are Angry! 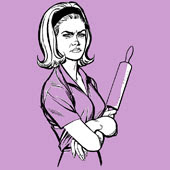 The women are riled up this morning!

And with good reason.

As for the bullying of business, this is simply the natural extension of the administration’s abject lawlessness — stomping on the rights of car-company bond holders, snatching bonuses away from AIG executives, pushing for mortgage cram-downs — which views contracts and statutes as mere annoyances. This is what comes from electing people with no private-sector experience and no understanding that the rule of law is central to our economic prosperity.

Obama put all of the off-shore oil workers and on-shore support staff out of jobs with his drilling moratorium — tens of thousands of people unemployed instantly by decree. It reminds me of the movie The Fifth Element and Zorg enterprises where he randomly lays off a million people for some random PR reason. Ok. Obama is angling to be a dictator. He has the power. We gave it to him. He used it. The courts will be busy for years, unless he decrees otherwise. But what followed next was so comical I nearly dropped the Wall Street Journal in dog poo as I was walking my blue tick coon hound – a dog prefered by all racist white people because they hunt and sound so cool when they sing.

Obama ordered BP to pay all the people he put out of work.

Obama ordered BP to pay the wages of all the people Obama put out of work.
Next he’ll tell BP to pay all the other drilling companies for lost revenue so the US won’t lose out on their share of the profits which we depend on A LOT in our treasury. BP protested, naturally. Will they prevail? I have no idea.

Sherry over at Potluck:

The Crude hasn’t’ stopped but you’re president, you won so the buck stops with you. This took place in Federal waters. It’s your problem, not Bush’s, not the Republicans, it’s yours. Roll up your sleeves for more than a 15 minute photo-op and get your hands dirty. We see you walking on a cleaned up beach making jokes and jetting back for a barbeque with the stars.  In writing, the mantra is show don’t tell.  You tell us you care. You show us, you’re all about the party.  Guess which one is more compelling?

Next to our heavy-handed thugocracy, big oil is starting to look like the sympathetic underdog. I'm officially rooting for BP's survival.

and finally, an original cartoon from Staci.
Posted by Pat Austin Becker at 12:00 PM

Has anyone seen any information that BP did something unusual to "cause" the oil spill? I know the bow out preventer did not work, but at 5000 feet, do you really think that such a device is going to be 100%? I think not. What ever happened to being concerned about the problems a company is having and trying to help them? Consider this:

In short, where did the hostility come from? Is it appropriate for the president of the US to be formenting violence against a company because something bad has happened? No one has proof that this company did anything intentionally wrong. One fact, I think BP is "nationalized" by the British. As such, it would represent the pinnacle of excellence in Obama's world. I sense that people are beginning to show violence to BP, our president is not doing a thing to hold this is check.

Perhaps The Big O could do something constructive. Like easing the need for environmental approval for activities in the Gulf. Doing a study to determine when fishing could resume (people feel better when they have a plan). Increase the drilling, not decrease it to stimulate employment and allow drilling in safer water. Do a quick study on blow out preventer and assure their efficiency. I could go on. But formenting hostility is not required.