Sheryl Crow Just Wants to Have Some Fun, but Not With the Tea Party 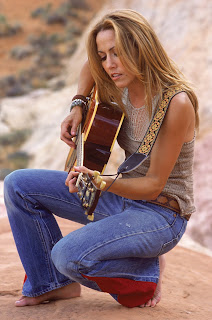 Because Sheryl Crow is so superior to everyone else she is now qualified to pass judgment on patriotic Americans expressing, as Crow is, their right to free speech and engagement in political discourse.

Via Newsbusters, Katie Couric asked Crow in a Glamour magazine interview (Glamour?!) what she thought about the activism of the Tea Party movement.  Crow's response:


"I appreciate the fact that those people are out there and that they are fired up," responded Crow, before adding that Tea Partiers "haven't educated themselves...they're just pissed off."

When will celebrities learn to just shut up and do what they are paid to do? Why do so many of them continue to alienate fans and potential customers?  It runs both ways, to be sure.  I'm sure liberals get irritated at Chuck Norris or Ted Nugent when they express their opinions, too.  The difference, it seems to me, however, is that in this case Sheryl Crow sinks to judgmental name calling.

I could be wrong, but I don't recall Nuget, Norris or Janine Turner insulting the other side.  Can't you just express an opinion, if you must, without being insulting?
When you have nothing else to back up your position, rely on the insult.
Not only are Tea Partiers "angry" but also potentially dangerous; a little too much Janet Napolitano in your reading stack, Sheryl?:

"My main concern is that [the Tea Party is] really fear-based," said Crow, a cancer survivor and environmental activist. "What's coming out of the Tea Party most often, especially if you go onto YouTube, and you see some of the interviews with these people who really don't even know what the issues are, they're just swept up in the fear of it and the anger of it."

"They're not sure what they're angry at," Crow continued. "[T]hey don't understand what's happening on Wall Street."

The singer also worried that the "uneducated" and "angry" Tea Partiers could even become dangerous. "[K]nowledge is power, and anything less than that when it comes to anger can be dangerous," said Crow.

There's more, but I'm sure you're busy, Miss Crow.

How's that toilet paper rationing thing working out for you?

Here is the entire interview, if you are interested.
(H/T:  Kim Ebey)
Posted by Pat Austin Becker at 4:30 PM

I was hoping you'd bring up the t.p. rationing. She is such a dumb broad. Open mouth insert liberal talking points. I had one of her albums once upon a time but increasingly became turned off by her pretentiousness and condescension. And I don't like how she introduced Stevie Nicks as Miss Stephanie Nicks at one of her shows. Total Gwyneth Paltrow moment there. Ol' douche.

Umm....no. Some of us are angry BECAUSE we've educated ourselves and are paying attention.

If you're not angry, you probably are some sort of douchebag entertainer who voted for this train-wreck in the first place....OR haven't been paying attention.

The uneducated American masses can simply pay Ms. Crow back by not buying any of her music and not attending her concerts.

Who is Sheryl Crow?

Stevie Nicks has always been a true inspiration
To so many people. And her fans are bewitched by
Her beautiful songs, voice & unique style.
She inspired the entire clothing, jewelry & accessory
Line in my online store, Sister Of The Moon!
Everything from dripping chiffon hanky hem skirts,
Billowing floaty batwing wrap tops, decorated top
Hats + tambourines, identical Stevie replica jewelry,
Including “The” Crescent Moon, and Pyramid necklaces,
As well as her Wild Heart rings! Velvet legwarmers,
And super floppy berets and so much more~

Thank you for posting this Sheryl Crow article, and Brightest Blessings!

Sister Of The Moon