Take a Trip to The Norton Art Gallery 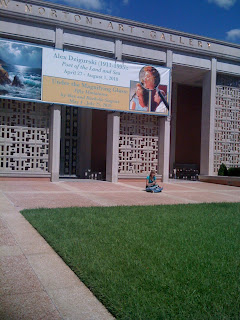 I'm feeling very cultured today; we went to the Norton Art Gallery this afternoon and had a nifty time.  We took Steve's visiting New Jersey friend and his family; they'd never been before.  I'd admonished them beforehand - "You can't take pictures there!"  and much to my pleasure, they've changed policy.  You can take pictures but no FLASH photography.

So there I am without my camera.  But I had my handy-dandy cell phone and I'll show you some of my favorite stuff.  That's a sophisticated term I learned in my 18 hours of Art History classes at LSUS - "stuff."

Seriously, the Norton has some beautiful and historically important work.  I'm excited about the Library they're working on which will be open as a research library in several months.  One of the guides told me they have some wonderful things in there. One of the things Steve really likes at the Norton is all the Remingtons.  I didn't photograph any of those, mostly because I didn't think about it.  They aren't my favorite.  I admire them, but that's not what I go to see.  After a while, one Indian on a horse looks like another, to me.  But there's a painting of George Washington that I like that is believed to be painted by Gilbert Stuart's daughter Mary.  There is also Thomas Sully's portrait of Andrew Jackson dated 1845 and a cool 1794 miniature of George Washington  by Andrew Robertson.

Still in the Early American area, they have a case of Paul Revere Silver and some pieces by Daniel Henchman.  I especially liked this teapot: 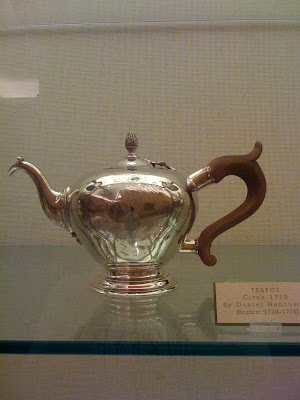 Their pieces were beautiful yet functional.  The museum also has a huge Revere cast copper alloy bell.

We came to what Steve called "the cow room" which had bronzes, paintings, and sculptures of cows.  There are two display cases showcasing these nifty Royal Doulton hand-painted cow plates.  Each plate has a different scene: 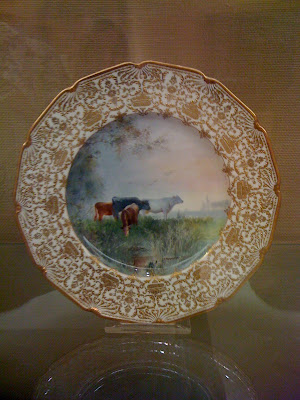 Showing at the museum until August 1 is a collection of works from artist Alex Dzigurski who painted fabulous seascapes.  He was a Serb and was born in 1911.  He graduated from the School of Art in Belgrade in 1929.  He was drafted into the Yugoslavian army in 1941, was taken prisoner shortly thereafter, escaped, fled to Vienna and worked as a housepainter until the end of the war.  He fled to Italy in 1945 and eventually to Pennsylvania in 1949.  He eventually settled in California and died in 1995.  The paintings at the Norton are from his wife's collection and they're gorgeous.  I took this picture, but it doesn't do it justice: 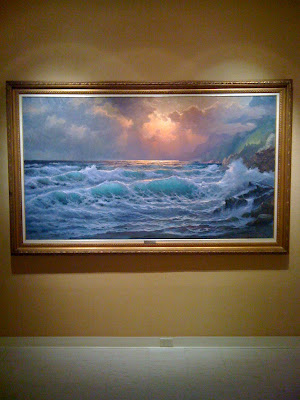 Here are a couple of other paintings I liked, both by Martin Johnson Heade: 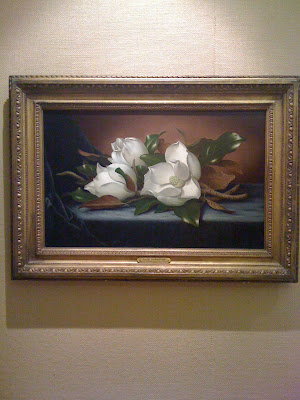 I could totally see that one hanging in my house.  I love magnolias.

I liked this one, too: 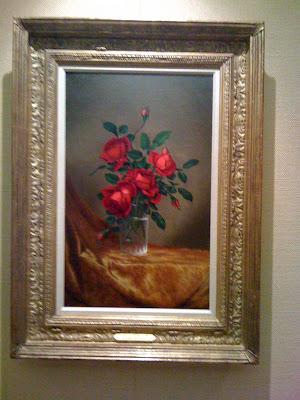 All in all, it was a nice afternoon.  We walked the grounds out back afterward and it was hot but still very pretty.  It's prettier in the spring when all the azaleas are blooming but it's still very peaceful and nice back there.

If you live around here, put the Norton on your list of places to go.  It's a wonderful way to waste away the afternoon.  The Norton is known for its collection of Hudson River School paintings. The Bierstadts are gorgeous.  There is a Mary Cassatt there that I love but that wasn't out today.  There's a room of collectible firearms and a room of dolls (they kind of creep me out but some people are into that sort of thing.)  There's also a huge painting by Lloyd Hawthorne of Captain Henry Miller Shreve clearing the great raft from the Red River.  And finally, don't miss the tapestries that date from 1541-1546.  Most of them depict images from Plutarch's epic, Africa.

Coming up August 17 through the end of the year will be Ansel Adams:  The Masterworks.

Below:  A brown pelican sculpture on the back grounds.  Bonus points if you can tell me what kind of flower that is. 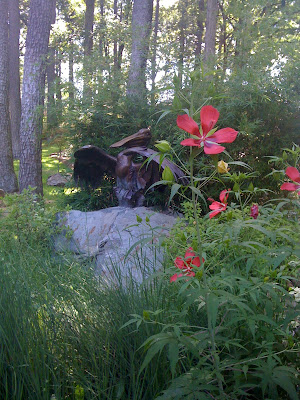 Well, it kind of looks like our hibiscus, but ours has a lot fuller blooms.

But, I'll go ahead and guess hibiscus anyway.

Andy,
I think it might be in the hibiscus family, too. The leaves are shaped differently though, and they grow on stalks, almost like bamboo. These are growing in, or at the edge of, a little pool, so they're heavy water drinkers. I thought they were gorgeous!

Pat, I described it to my wife. She said that it is probably a Texas Star. Some people call it a Hearty Hibiscus.

But when she looked at it, she said it's not exactly that, either...probably something exotic.

You stumped her on flowers...so that's pretty good. We actually got stumped out at Norton one time on those little ornamental Japanese Maple bushes.