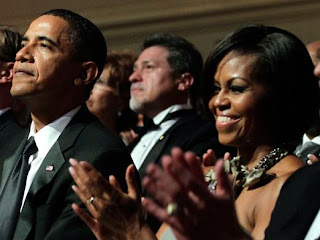 Thank goodness Obama has his boot on the neck of BP and isn't resting until this crisis is solved and people are back to work in south Louisiana.

Last night he was not resting at the Kennedy Center, taking in a performance of "Thurgood."

The New York Times says of the play,

At the end of the play Marshall recites from a Langston Hughes poem opening with the following line: “Oh, let America be America again.”


Coast Guard Rear Adm. James Watson has written a letter to BP, giving the company 48 hours to come up with additional "leak containment capacity" to deal with the oil spill in the Gulf of Mexico.

At least somebody is on the job.
Posted by Pat Austin Becker at 11:53 AM

They have 48 hours, then what? Is he going to cry?

I saw a patient in the office the other day and he was headed to the Gulf to do a very specialized job of flipping 12000 feet of drill stem at the well head 5000 feet down and drilling into the head itself. He extimated 30 days. Alot is being done down there that we are not aware of. Oh, drill stem is extremely heavy. It is about 20 feet long (pipe is usually 30 feet) and 4 men can not lift a piece, they have to roll it.