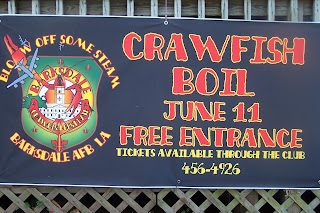 We survived the inaugural Barksdale Air Force Base crawfish boil and that's saying something because it was hot as blazes out there yesterday, at least, until the sun went down.  It was still hot then, but it was better.  In my FMJRA today I'll be lacing through some pictures of the event.  The crowd was not as large as I expected but I'm blaming that on the heat.  It was still a mighty respectable crowd and early in the afternoon lots of families were out with their kids. 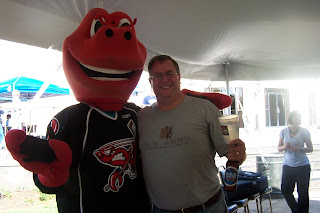 As always, Steve and I were the first to get there and the last to leave; it's becoming a tradition for us at these things.  We registered for door prizes which we did not win.  We got a couple of beers (Sam Adams, Boston Lager) and milled about, bought t-shirts, shook hands with Clawed, the mascot for our local hockey team, and finally took a seat and watched the band finish setting up. 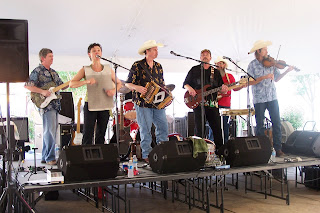 The band was The Red River Playboys and they were fabulous!  They've been around the music scene here for years and years, but I'd never heard them.  I'll post a short clip of them at the bottom of this.  They played Cajun/Zydeco music, Swamp Pop, and blues complete with accordians, fiddles and a washboard.  Awesome!  At the end of the night the wife of one of the guys gave me one of their CDs and I felt a lot better about not winning a door prize earlier!  Steve and I listened to some of it on the way home and it's great!  They're on sale here, at their website. 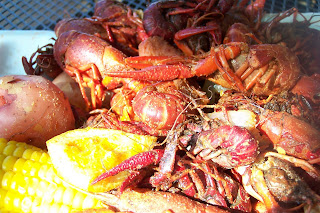 The crawfish was catered by #1 Crawfish from Haughton, La., and they were some of the best I've had.  It's getting sort of late in the season so I wasn't really expecting the crawfish to be as big as they were, but man, when I got my box, they were great - super hot and spicy, and accompanied by the traditional corn and potatoes.  They also had some sausage in there, and mushrooms, which I've never seen thrown in a crawfish pot before but Steve ate 'em.  I mowed through my box in no time while the Iowa boy took a little more time.

Then it was back to the band.  We found a seat near the front and sat next to a couple of Navy fellows from Houston who were having a wonderful time enjoying the hospitality of the base and the locals.  We talked to them for a while and gave them our free beer tickets (Miller Lite - ick).  When it was time for the crawfish eating contest we urged them on over to enter, but this  guy ate his entire box in under two minutes and won.  He mowed through he crawfish faster than anyone I've ever seen, finishing with time to spare.

By the end of the evening even I was on my feet doing the Cha Cha Slide or something; the DJ was trying to teach us a more complicated line dance but gave up on us and did the Cha Cha Slide which any moron can do!  I nearly died of heat stroke but it was lots of fun.  Before the night was over I'd even scored a cookbook from one of the sponsors, Lula Hill of Coldwell Banker Realtors.  I was tickled to death!

We went up on the Hangar 2 deck so I could cool off and finish my last Sam Adams before we cut out for the night only to find a beer pong game in progress.  No, I did not play.

All in all it was a fun night and we hope they do it again next year, but maybe a little earlier in the season before it hits 98 degrees outside!

Enough about that - on to the links; I'll spread some more pictures through the rest of the post:

Stacy McCain has been spending too much time on YouTube but he has found some cool stuff!  When America Was a Great Country...; love it!

Pirate's Cove is totally over The Whiner in Chief.  Over it.  And on a related note, Doug Ross has a suggestion for modification of the inaugural oath.  And Pundette notes that Obama is not exactly fair.

No Sheeples Here is supporting Mosab Yousef; if you don't know about him, go check out her post.  Bob Belvedere has more.

Legal Insurrection has an interesting post about a congressional race in Massachusetts.

Fishersville Mike gives me reason to hope for better blog stats, but you know, I don't really want September to come alllllllllllll that fast.  I'm on vacation, ya know.

Red has the lowdown of the Hallmark card yanked because of "raaaaacism."

Little Miss Attila is not a fan of Obama's drilling moratorium.

WyBlog reports on the UN resolution against Israel and Obama's support of it.  Disgusting.  Yukio at Critical Narrative has some thoughts as well. 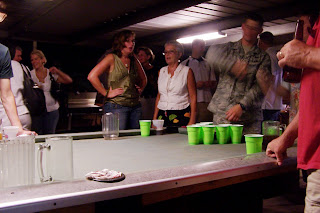 Bride of Rove has a spot on assessment of the Alvin Greene deal.

Ruby Slippers points out that Rosie O'Donnell is still an idiot.

A Cop's Watch is not impressed with the disclaimer on the Constitution.

Pecan Corner links to a blog by an Army wife in Germany; she's got a great Normandy post!

That's it for now.  I have Saturday things to do.  Be cool and I'll catch you later!  But first, listen to a little of The Red River Playboys:

Posted by Pat Austin Becker at 9:49 AM

sounds like fun! while you were doing the cha cha slide, i was sitting on my patio reading the secret life of bees until it got too dark to read. then i sat for another hour watching the fireflies and listening to the locust. the fireflies made me think of you and steven. i had to go inside when i thought of the bat we saw when steven was here one summer while we were sitting outside w/o the patio lights. ugh!!!

I've read that book! I liked it.

Wish I was there watching the fireflies; probably lots cooler up there!

Thanks for the link and for promoting the cause of Mr. Yousef, Pat.

With your permission, I'll add you to the list of our friends over at the Save Mosab Yousef site.