The Quick Low Down on the Oil Spill 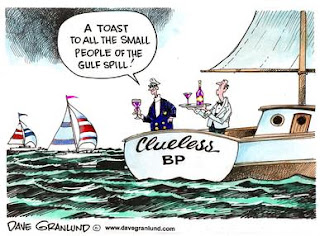 Ben Stein has the short 'n sweet of the Gulf oil spill today over at American Specatator.  In a brief article of bullet points, Stein points out exactly what's going on and he's absolutely dead on.

There's been all the clamor over the Jones act, which I've delved into as well, and Obama's failure to waive it even as foreign ships with more than adequate technology offer to come help clean up the mess.  It's the unions, stupid!  Obama is sacrificing the wetlands for the unions. Period.

Stein raises several other points with which I fully agree, most particularly that of the $20 million BP shakedown:

I can always tell which people have never read the Constitution and/or have no idea of Constitutional law by who says, "It doesn't matter that the law does not allow Mr. Obama to just extort money out of BP's shareholders -- most of whom are widows and pensioners. He can do it anyway because the situation is urgent and a crisis."

The Constitution makes no exceptions about limiting the President's powers if he deems an event a crisis. The Constitution is a document of enumerated and limited powers for each of the three branches and for the federal government itself. Nowhere does it say, "However, if the President says it's a crisis, he can do anything he pleases and this document means nothing."

The whole point of the Constitution is that it is in control no matter how dire the situation. The fact that Mr. Obama does not recognize this, and that when one lone Congressman points it out he gets spit on by his colleagues, is deeply frightening. The truth that the media almost never calls him on it is even more worrisome.

Rep. Joe Barton maybe chose the wrong forum for his comment, or maybe he shouldn't have apologized to Tony "Let's Go Yachting!" Hayward, but he's correct in calling a shakedown a shakedown.   And he's correct in asserting it is unconstitutional.

Read the whole thing.
Posted by Pat Austin Becker at 11:51 AM