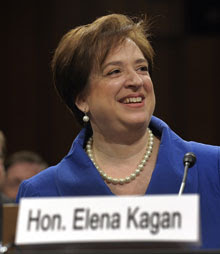 I'm listening to the Kagan hearings today because I want to see which Senator asks her about her medical degree empowering her to write language for the American College of Obstetricians and Gynecologists.  Outrageous!  I also want to see who DOESN'T ask her about it.

By now you've read, I hope, Shannen Coffin's report on Kagan's manipulation of science to further her personal political agenda while serving in the Clinton White House.  Shannen Coffin is, of course, a former deputy attorney general who defended the ban on partial birth abortion during the Bush years.  An excerpt:

There is no better example of this distortion of science than the language the United States Supreme Court cited in striking down Nebraska’s ban on partial-birth abortion in 2000. This language purported to come from a “select panel” of the American College of Obstetricians and Gynecologists (ACOG), a supposedly nonpartisan physicians’ group. ACOG declared that the partial-birth-abortion procedure “may be the best or most appropriate procedure in a particular circumstance to save the life or preserve the health of a woman.” The Court relied on the ACOG statement as a key example of medical opinion supporting the abortion method.

Except that the ACOG didn't decide that partial birth abortion was the best procedure; Kagan did:

The task force’s initial draft statement did not include the statement that the controversial abortion procedure “might be” the best method “in a particular circumstance.” Instead, it said that the select ACOG panel “could identify no circumstances under which this procedure . . . would be the only option to save the life or preserve the health of the woman.”

Notwithstanding its allegedly apolitical nature, ACOG shared this draft statement with the Clinton White House. Miss Kagan, then a deputy assistant to the president for domestic policy, already knew ACOG’s stance as a result of a July 1996 meeting at the White House, at which ACOG representatives told administration officials — according to a Kagan memorandum [PDF] — that “in the vast majority of cases, selection of the partial birth procedure is not necessary to avert serious adverse consequences to a woman’s health.”

Upon receiving the task force’s draft statement, Kagan noted in another internal memorandum [PDF] that the draft ACOG formulation “would be a disaster — not the less so (in fact, the more so) because ACOG continues to oppose the legislation.” Any expression of doubt by a leading medical body about the efficacy of the procedure would severely undermine the case against the ban.

And so rather than have the ban undermined, she made up science.  She wrote the language that ended up in the ACOG opinion which was used in future litigation against bans on partial birth abortion.  Coffin's final word:

Miss Kagan’s decision to override a scientific finding with her own calculated distortion in order to protect access to the most despicable of abortion procedures seriously twisted the judicial process. One must question whether her nomination to the Court would have the same effect.

Some senator should have the wherewithal to take this on and require that Kagan explain herself. Not only is it, if accurate, a disqualifying episode for a Supreme Court justice; it is grounds for a solicitor general to step down. And her failure to advise the courts — which believed they were relying on neutral, expert testimony — constitutes a significant ethical breach.

Thanks in great part to Kagan's apparent fabrication, all state laws banning partial birth abortions were struck down in 2000. No one knows how many children might be alive now if it weren't for Kagan's alleged falsification. Accurate data on partial birth abortions is hard to come by; there are many reasons why a doctor might not want to own up to performing this diabolical "procedure." But low estimates put the number of victims at somewhere between 650 and 2200 babies terminated annually before the ban. I don't know how many were killed in states that had a ban in place before the 2000 decision. But would it be going too far to say, if these charges are true, Kagan lied, babies died?

And so I'm listening to Elena Kagan today to see if she is given the opportunity to explain herself.   Because regardless how you feel on abortion, this is a deal breaker.  She lied.  She used her political position to further her political agenda and fabricated science to do so.  It's a major ethical violation.

Update:  Coffin notes at The Corner that over reaction to this news is not the way to go.  All this actually means for now is that there are certainly questions to be asked of Kagan.  She was not necessarily tampering with evidence.  See his notes here.

Follow today on Memeorandum and at The Other McCain who links a second Kagan lobbying effort on the abortion issue.
Posted by Pat Austin Becker at 9:33 AM