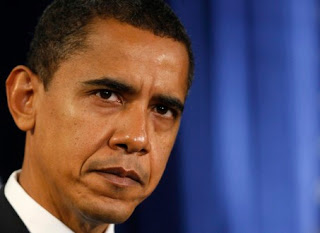 Add this to the list of "Oh no, he didn't!" as it pertains to the twaddle that comes out of Obama's mouth:

Sounding reflective as he heads into a bruising electoral season, President Barack Obama told POLITICO columnist Roger Simon that the Gulf disaster “echoes 9/11” because it will change the nation’s psyche for years to come.

Except without the leadership, the terror, the Islamists and the 3,000 dead Americans.

And, ya know, that anti-incumbent mood out there, it's Bush's fault:

“So I’m going to be fighting on their behalf and doing everything I can and using my bully pulpit to communicate that fact to the American people,” he said. “I know there’s an anti-incumbent mood out there right now because … people are frustrated about the hit that the economy has taken. … But what I’m going to remind people of is we didn't create this mess. And this Congress responded forcefully at a time when this economy really could have fallen off a cliff.”

Our anger apparently has nothing to do with the ramming of Obamacare down our throats, the effort to pass cap and trade, the unfathomable debt, and rising taxes, energy costs and unemployment.   "They've done a great job," he said, and "deserve re-election."

And now, all of a sudden, he's worried about what our children and grandchildren will have to bear in the future:

Oh, you didn't think he was talking about that debt, did you?  Har!  No, no, no, silly fool.  He wants to use this crisis to further his political agenda and his energy policy.  Windmills and all that.
How about opening up ANWR, buddy?  Or are you too worried about the caribou?
Oh seriously, I'm with Malia - plug the damn hole.  And I don't mean the one in the ocean.
Posted by Pat Austin Becker at 5:02 PM

It's kind of like watching a keystone cops movie on leadership.

Quoted from and Linked to at:
The Pablum Puke Of The Day