Governor Jindal Has a Plan for Medicaid Reform in Louisiana 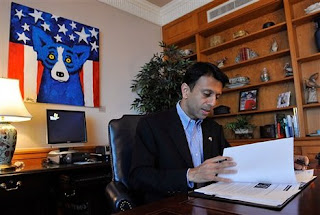 When Obamacare passed at the end of March, Governor Bobby Jindal was outspoken in his opposition to it.  Jindal knows heath care.  Before becoming Louisiana's 55th governor, Jindal served as Governor Mike Foster's Secretary of the Louisiana Department of Health and Hospitals where, under Jindal's tenure, Louisiana's Medicaid program went from near bankruptcy to boasting a surplus of $200 million in just three years.

With the passing of Obamacare, Jindal went on the record:

“The health care bill is bad for Louisiana; it is bad for our country,” said Jindal in a quick early afternoon news conference.  It brings added costs at a time of skyrocketing debts and a bad economy, he said.

Jindal said the health care legislation approved by the U.S. House Sunday will cost Louisiana $345 million more a year because of the expansion it calls for in Medicaid — the government’s health insurance program for the poor.

Those are just counting the 360,000 individuals who are projected today, he said. “New enrollees will come out of the woodwork,” he said.  In addition, it requires health care providers to be reimbursed at a higher rate, Jindal said.

The Opelousas Daily World reports that Jindal and his Health and Hospitals Secretary Alan Levine have worked quietly to contain Medicaid costs in Louisiana.  About a quarter of our population relies on Medicaid.  So they've worked to come up with a plan to offer choices for recipients, providers, and contain Medicaid costs. Their plan?

The answer Jindal and Levine came up with is, in effect, to hire networks of private providers to cover Medicaid patients, or at least the mandated populations, mostly single adults with children. Each parent could choose a plan based on a provider's success with specific health conditions that might be of concern in the family.


The providers would have a choice of taking a flat fee per enrolled recipient to provide whatever care is necessary or getting money on a fee-for-service basis. The plan is written into the state budget for next year and could be implemented statewide by July 4, 2011.


The Jindal plan has everything — choice for recipients, choice for providers, cost containment, expanded coverage, and the tantalizing prospect of improved results for our state and federal money.

This new "managed care program" focuses primarily on children and pregnant women and will begin in just seven parishes as the plan rolls out.  In just over a year from launch, this plan will be used statewide.  The elderly and those with special needs would not be affected under this plan. Secretary Alan Levine says, “We are trying to bring some organization to a very disorganized system that is frankly financially out of control.”

If Jindal's past record on Medicaid reform and containment is any indication, the plan is likely to be a success.

The Advocate has more details here.
Posted by Pat Austin Becker at 11:51 AM