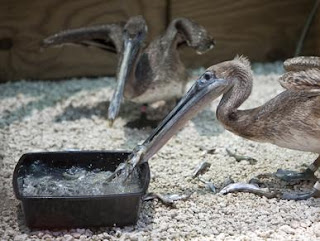 Seems like all I can blog about these days is the oil spill.  Not to state the obvious, but it's just such a tragic thing when you know what is at stake down on the Gulf coast.  It's awful for Louisiana but the impact on the other states is awful, too.  Anyone who has traveled in south Louisiana knows it's just a different way of life there; it's an economy and a way of life centered on the water.  They fish.  They run businesses related to fish, to seafood, to industry on the water.  They're doing what they know how to do and what their ancestors before them have done.  And yes, there's a huge service industry around the oil business.

There's been caution about over stating and over hyping the spill.  I guess I can see some of that and I realize that a lot of the environmental damage will rebound.  There is that backlash coming from the enviros, like the Sierra Club, to do away with drilling in the Gulf.  That's just not realistic.  You can't just pull the plug and do that.

I suspect this will be some of Obama's focus tonight in his speech - weaning us off of big oil.  Build windmills.  Green energy.  His approach is wrong.  His approach kills capitalism and puts nothing in the place of the oil he is taking away.

There's a website that is working to tell the human story of what is happening down south.  Be sure to check it out.  It's highlighted at the top right and I'll leave that up for a little while.  You might start with this story about a charter fisherman who is now a "slave," as he calls it to BP.  The proprietors of the site are telling the story of the entire Gulf coastal region, not just Louisiana.  There's a lot of great stuff there, so check it out.
Posted by Pat Austin Becker at 12:21 PM

And about those fire booms that the feds were supposed to buy and have availble for immediate use --- "They said this was the tool of last resort. No, this is absolutely the asset of first use. Get in there and start burning oil before the spill gets out of hand," Bohleber ( Jeff Bohleber, chief financial officer for Elastec) said. "If they had six or seven of these systems in place when this happened and got out there and started burning, it would have significantly lessened the amount of oil that got loose."

I'm sickened by the way Obama is using this disaster for his own political ends and dealing a near death blow to the region with the moratorium. I posted a video at Poltuck. I'm sure you know a lot more about this than I do, Pat. Though my opinion of the president is quite low, I'm just amazed that he would do such a harmful thing to the families of the Gulf coast.