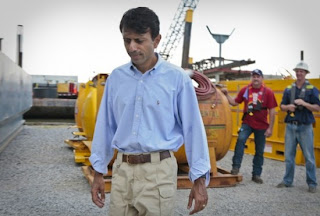 Jindal and state Attorney General Buddy Caldwell on Sunday filed a legal brief in support of a Louisiana-based offshore services company that’s asking a federal judge to lift the ban. The ban is “effectively turning an environmental disaster into an economic catastrophe for the state,” the brief alleges.

The brief also points out that federal officials are required to work with states in such matters and in this case, the State of Louisiana was ignored:

The brief supports a lawsuit filed earlier this month by Hornbeck Offshore Services, which alleges the ban violates the Administrative Procedure Act and the Outer Continental Shelf Lands Act.

Jindal is raising his own claims too. The brief cites language in the offshore statute that calls for federal officials to work with states in making decisions about development policy in federal waters.

“Inasmuch as the State of Louisiana was completely ignored by Defendants in the establishment of the moratorium for alleged safety reasons, the question arises whether that failure renders Defendants’ action invalid,” the brief states.

How are the coastal residents faring this week?  Poorly.  NPR has the story of Marty Theriot who operates an ice house in Dulac, La.   There isn't much need for lots of ice now that the fisherman aren't fishing and the shrimpers aren't shrimping:

"I'm making as less as possible," Theriot says. "Trying to save money. I just make a little ice during the day, so I can sell them ... to keep my doors open. Just made a batch of ice."  This year, the Monday after Mother's Day was supposed to mark the start of Theriot's busiest season.

"We worked all day Saturday," Theriot says. "Then we get a telephone call saying they just closed the shrimp season because there's oil coming into the coast."  Instantly, 90 percent of Theriot's customers stopped fishing, and therefore buying ice.

Paul Clement in Chauvin opened Paul's Drive-Thru in January in anticipation of the upcoming tourist season which, of course, will not materialize.   He's going to cleanup sites begging workers to patronize his business, so far, to no avail.

As for the cleanup efforts, many locals in the local service industry are finding that BP is bringing in materials and equipment from the outside that are already in place locally.  The locals are getting shut out:

Don Griffin, who owns Griffin's Marina in Leeville, said he has watched BP contractors bring in portable fuel tanks and doing construction on a nearby dock to supply cleanup boats. His business, about a mile away, has been providing fuel services for years.  “It seems mysterious: Why spend hundreds of thousands of dollars on something that's already there?” he asked.

Same goes  for Jimmy Lirette who owns a rental company.  His business has dropped since the moratorium but even worse, he, too, sees BP bringing in equipment from the outside:

“I kept seeing trucks from Florida and Missouri with the same equipment I had here in the yard, not on rent,” Lirette said. “It was just a bit frustrating.”


Maybe the people at the Daily Kooks can explain to all these residents why the moratorium should stay in effect.  Jed Lewison calls Bobby Jindal "a fool" and his position "stupid beyond belief."  Lewison believes we should "fully understand" deepwater drilling before it is resumed.  Lewison will likely never understand anything more complicated than a keyboard but he does represent the views of many leftists who would shut down all drilling altogether, which, as we all know, is totally unrealistic.

The drilling ban may cost Louisiana’s economy, “which was already weakened by Katrina and is now crippled by the Deepwater Horizon disaster,’’ almost 11,000 direct and indirect jobs in five months, Caldwell said in papers filed yesterday in federal court in New Orleans.
“Even after the catastrophic events of Sept. 11, the government only shut down the airlines for three days,’’ Caldwell said in support of Hornbeck Offshore Services LLC’s lawsuit seeking to end the moratorium.
A federal judge is scheduled to hear arguments today regarding the moratorium.

And, as I've suggested before, nobody suggested placing a moratorium on coal mining after the April explosion in West Virginia in the Massey coal mine which killed 29 workers.

“Even after the catastrophic events of Sept. 11, the government only shut down the airlines for three days,’. . . . And, as I've suggested before, nobody suggested placing a moratorium on coal mining after the April explosion in West Virginia . . . ."

The situation is a little different when puppet-master George Soros is waiting in the wings to make mega-billions with Gulf deep sea oil rigs moved to Brazil using $2 billion of U.S. taxpayer money (all right, money borrowed from China). And U.S. competition--who needs it? To the Dems, Louisina's suffering is a gift that keeps on giving.