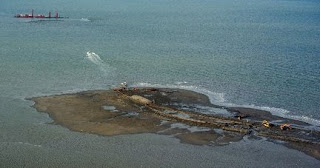 The federal government's latest effort to shut down Louisiana's effort to protect the coast is to halt sand berm dredging near the Chandeleur barrier islands.

The feds are requesting that the dredging operation be moved two miles further offshore.

The Chandeleur islands are an important nesting area for the brown pelican which has been hard hit in the oil crisis.  Interior Secretary Tom Strickland says the current dredging operation compromises the islands in the event of a hurricane.  He explains that the state was to install pipe that would transport sand from a less sensitive area, however, it would take five to seven days to run the pipeline, time which Plaquemines Parish President Billy Nungesser says could be better used to just build the berms.

NOLA has the full story here.

I'm trying to see both sides here; I'm trying to understand the "coastal scientists" who contend that the berms will "change tidal patterns" and lead to more long term erosion of the islands, but if the islands are killed off by the oil what difference does it make?  To borrow from Greta Perry's analogy, if my house is on fire, what does it matter what room I try to extinguish first?  It's all doing down.

Jindal's argument is that it took so long to get the project approved in the first place, he doesn't want to stop and go through all the red tape again.  Dredging is scheduled to stop at midnight Wednesday.

And if you don't think Louisianians are watching this map closely, well...time is of the essence:

It seems that the feds are doing everything they can to cripple Louisiana's own response to this crisis.  Bobby Jindal reached his exasperation point long ago when he said, and I'm paraphrasing, If you're not going to fix it, get out of the way and let us do it ourselves!  From the moratorium, and Salazar's promise to appeal the strike down of that moratorium, to the crazy red tape on the berm projects, to shutting down the skimmer barges for 24 hours, and now this?

Well, we could get the idea that Team Obama was trying to neutralize Jindal's response, as if he were threatened by Bobby Jindal, or something.

Posted by Pat Austin Becker at 7:57 AM

We have far too much government. Just wait till they use the same logic on your health care.

Here's a question, Pam - if the feds qwere actively trying to stop us from cleaning up the oil, WHAT WOULD THEY DO DIFFERENTLY?

Thanks for the linky love. I get angrier each and every day!

We have known we needed barrier islands since 1925.